The Wonder Of Homemade Marshmallows 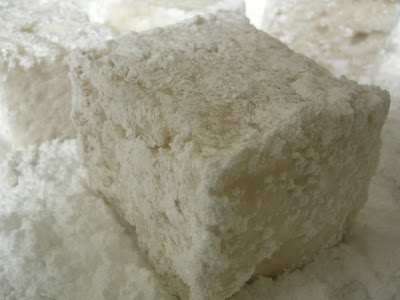 What inspired me to make marshmallows along with all of my other cooking baking you ask? Especially now, during this frenzied time of year?

Well I have often toyed with the idea and then I read this post a few weeks ago by David Lebovitz. It became clear that making homemade marshmallows could only heighten the holiday excitement. Besides, they are perfect in hot chocolate which is what everyone should be drinking right now.

I immediately consulted Martha Stewart, for who else could I count on to have perfected the art of making homemade marshmallows? The recipe looked simple enough. I even had the forethought to purchase the gelatin in advance, along with the corn syrup (a product which I am loathe to use but truth be told, marshmallows are not found in the health food section). The only thing missing was a candy thermometer which I found easily enough.

Yesterday afternoon, amidst the cookie baking chaos, Izzy and I set to work. First we dissolved the gelatin in a mixing bowl and then placed the sugar, corn syrup and salt into the pot and set it to boil. The mixture needs to simmer about 10-15 minutes until it reaches a temperature of 244 degrees. Your child needs to be extremely patient and cooperative to watch this, which Izzy was. He stood at the stove, eyeing the bubbling mixture cautiously. 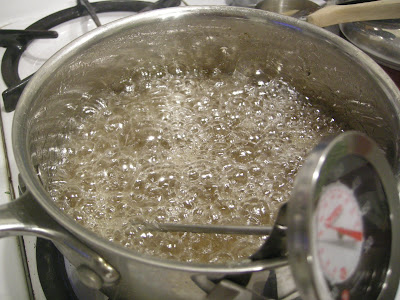 When the mixture reaches the proper temperature, it is time to dump the entire contents of the pot, slowly into the base of a Kitchen Aid Mixer, where the dissolved gelatin awaits. Then simply turn on the mixture at low speed and gradually increase it. Watch as the clear substance turns snowy white and changes texture. Izzy was awestruck, as was I. 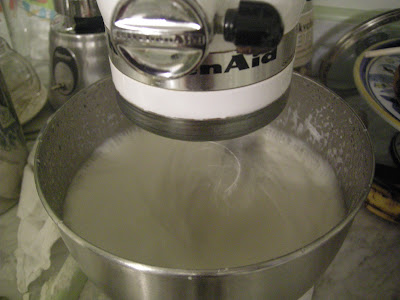 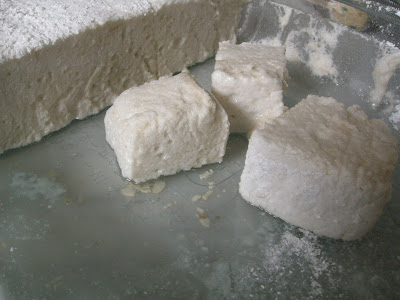