And Then There Were Two: Of Kittens, Cannoli and A Homeless Woman 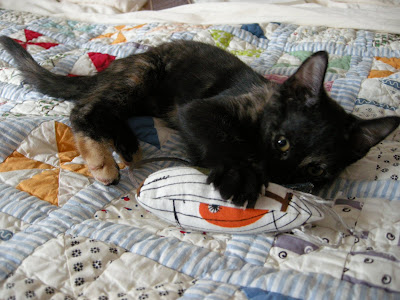 How many kitten adoption events need we go to before all of the Fang sisters find homes?

I had to ask myself this question this morning, knowing that Izzy and I were going to devote yet another gorgeous day to trying to find loving homes for our sweet girls. We were late getting started and I almost turned back before convincing myself that we had to press on. If all went well, at least we might even have time to stop for cannoli on the way home.

And so it was we found ourselves, pulling our red wagon packed with kittens, signs and snacks, on the Light Rail to Hoboken. Though late, we were the first to arrive on the scene, in front of Gotham Realty on 1st Street. As fate would have it, a lovely couple, in search of a kitten, made a bee-line towards our set up. They were determined to bring home a kitty and once they held Checker and Pokey, they fell in love. Our two girls charmed them and the dilemma turned into how many to adopt! They ultimately decided upon the two of them!! 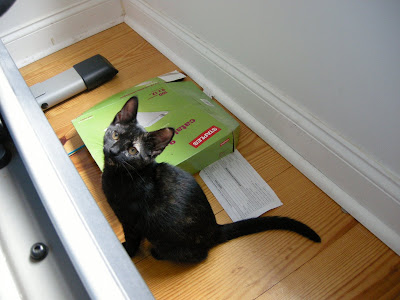 While J. ran home to get the carrier, T. cuddled the kittens. Though sad to see the girls go, we were as lucky with this adoption, as we were with our first one. Still we had one more who needed a home so we remained at our post, wondering if we would see Rabutnitcha go also. 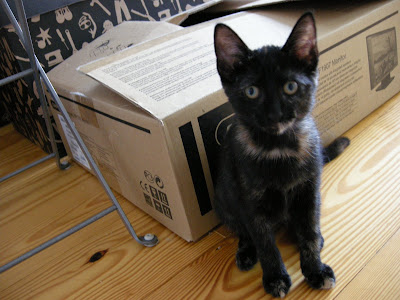 There was some interest but in the end we put her back into the carrier and took her back home, along with Occhi who will definitely remain with us. 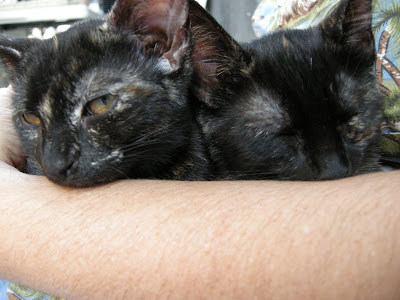 With Occhi and Rabutnitcha in tow, we began to make our way back home. It wasn't that easy. Not only were we waylaid by passersby eager to have a look at the girls but I also suffered a brief bout of hypochondria, wherein my throat felt as if it were closing up. I stopped on a nearby bench to regroup and contemplated a trip to the emergency room but a phone call to my stepmother L. led me to believe that a trip to the drugstore might help and so I carried on.

We made it over to Carlo's Bakery for the aforementioned cannoli. As we approached, I noticed a mob crowding the doorway which I realized were probably drawn in as a result of the bakery's new found fame from the T.V. reality show based there, Cake Boss.

Thinking death was imminent, I was in no mood to brave the line snaking out the door. How was I to die eating a cannoli if I couldn't even get to one? The red wagon would have to wait outside, and Izzy with it. In spite of myself, I waited, and when my dad called to see if I was feeling okay, I told him that in case anything happened to me, it would be cheering to know that I died in a bakery, in a quest for something good to eat.

Cannoli finally in hand, Izzy and continued toward home. He nibbling cannoli, me dragging the red wagon. As we stopped to adjust something in the wagon, a woman sitting on the steps of a nearby bank approached us. She came over to peer at the kittens and looked at them longingly. She then told me that she had lost her own cat two weeks ago. I assumed that she meant that the cat had died and I said I was sorry. Then she broke down in tears, pouring out her tale of woe to Izzy and me. She had left an abusive boyfriend and came back to find the locks changed and her things on the street, including her cat. She has since been living on the streets, no place for her or a cat. She called the Newark Humane Society to pick up the cat as she realized she could not care for it. She wondered aloud what had become of her cat. As she stood before us, teary-eyed over her cat, Izzy called out for another cannoli. I opened the box and handed one to him and another to the woman, at a loss for how else to comfort her.

She took the cannoli and began to eat. Through her tears, she smiled, marveling at the cannoli. She said something like, " I can see why he wanted another. I have never had this before but it sure is good." I asked her where she was staying and she told me she sleeps by the river in Hoboken. I suggested she try one of the shelters in Jersey City but she said they were too dangerous for her. We talked some more about other possibilities and she thanked me for talking to her and said she felt better. I gave her a bit of money and wished her the best and we took leave of her.

On the slow meander home, I wondered as to the best way to help someone like her and do truly hope that she finds her way one day soon, to her own home with cat and cannoli.

I've decided that if the time comes to adopt another cat, I'm going to pick siblings. They just seem to like each other more.

Sometimes, the best thing you can offer is a shoulder and some food. I'm sure she will remember it forever. :)

Amy: The siblings do seem quite content with each other. Having a hard time deciding whether to keep two or not. 4 cats might be one too many!

Wonder where that woman is now. It is pouring rain out here and she says she slept by the water...