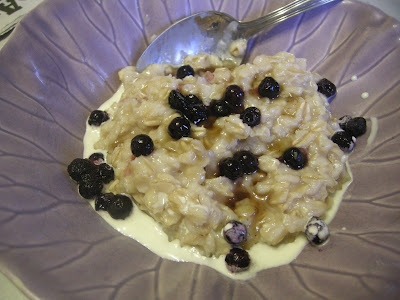 How is it that I've gone through my whole life not knowing that porridge was just another name for oatmeal? To me, porridge is the stuff of Oliver and fairy tales and sounds far more fun to eat. I still don't know what "pease porridge" means but that won't keep me from eating it
.
I don't really know much about oats because I was raised as a Farina girl, lapping up soupy bowls of it, doused with milk. Only later it life have I have discovered the pleasures of a hearty bowl of oatmeal.

As it turns out, oats can be quite enticing, provided they are gussied up a bit. The best way to do this is by adding frozen berries. Izzy loves to add blueberries, raspberries and blackberries to his porridge, sweetened with a touch of maple syrup and a touch of heavy cream. The berries not only serve to sweeten, they also cool down the steaming porridge so that a child can eat it without waiting.

There is nothing I like more than the idea of sending Izzy off to school with his belly full and warm. So each morning I have taken to preparing a different type of porridge. This week we have been eating Scottish Style Porridge Oats (too chewy for my tastes) and last week we were having Whole Foods Organic Oats (much softer and more pleasing to our palates). Whichever oats you choose make sure they are not instant. Surprisingly, most regular oats (barring McCann's) cook in about six minutes.

Aside from frozen berries, there are many other welcome additions to oatmeal. You can play around with all sorts of fruits, including dried, creating an entire porridge repertoire.
Posted by Izzy's Mama at 1/04/2008 11:15:00 PM

yummmy!!! I love oatmeal..aka porridge. We have a nurse/nutritionist who recommends mixing in hemp hearts or salba..I have put in an order for both to try it out...yummy! btw...you should try McCann's steel cut oats.. very different texture and more nutty

jep: Really, every morning? How long do Bob's take to cook? As for Izzy, as you know, I try my best. He eats what he knows. He has never tried the sweetened versions.

Tina:I have tried McCann's but they take too long for weekdays. Maybe for a weekend treat.

We're big oatmeal eaters, too, and I had to laugh, because our favorite combo is the same as yours: a little maple syrup, a lot of raspberries or blackberries.

Alas, as with many of our really, really healthy meals, three of us eat it. One (James) does not. :(

Oatmeal can be soaked overnight in cold water; by the time you heat it in the morning, it is done. You may cook longer depending on how soft you like it.

Carolyn: So I have heard but I have the six minutes so what would be the benefit? It would require too much advanced planning!