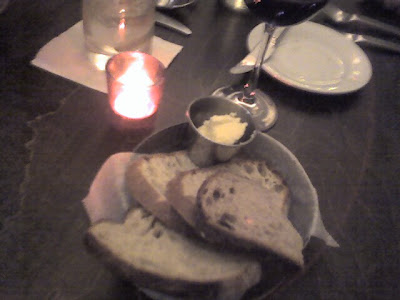 I couldn't be more pleased that a restaurant of the Ox ilk has opened in Jersey City. I am more than happy to report that on this, our second visit, just a few months later, things have definitely improved. For one, a basket of bread and butter appeared at our table. Apparently I wasn't the only one to lament the lack thereof.

The menu offerings our now more complete and most of the items were available. However strangely enough, at 6:30 on a Thursday evening, they their signature dish, the luscious Ox Tail appetizer, was mysteriously missing, indicating that the bread issue may have been ironed out but other issues are still pending.

On the bright side, all of the main dishes sampled were appealing and the duck definitely stands out. The Duck Breast special (served with mashed sweet potatoes and Swiss chard in a chocolate port sauce) and the Duck Confit were both expertly prepared (Maybe they should consider changing the name to Duck since that bird always seems to be on hand).

My companions sampled the Scallops, very flavorful and the Rabbit Pappardelle which also held their own. More in-depth descriptions are unavailable as I was mainly entertaining Izzy at an hour when he should have been sleeping.

Which brings me to yet another reason to love Ox. Despite of what I have read elsewhere, I must insist that Ox is a child-friendly establishment( not that I suggest going with a gaggle or on a noisy weekend late night). For an early weeknight, it is a fine spot for one or two reasonably behaved little ones. Izzy was thrilled with his Tomato Soup appetizer and the Broccoli/Cheese Gratin which was not even on the menu. The staff were also kind enough to bring him one tiny portion of Grapefruit sorbet to round out his meal. Not only that but he was enchanted by the mini disco balls which adorn the ceiling. Watching them spin kept him happy long after his bedtime. 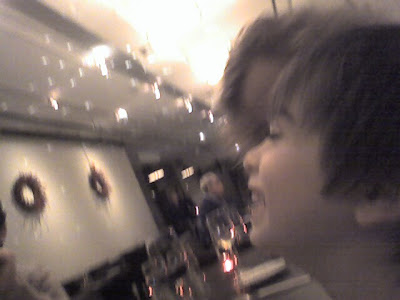 All told, even though Ox still needs a bit of work (I'd stay away from the Frisee with Goat-Cheese stuffed dates), and a larger stock of ox tails, it is an extremely welcome and appealing addition to the downtown Jersey City restaurant scene.