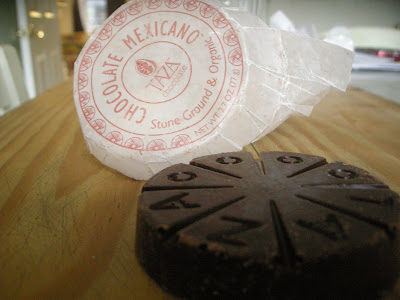 On our last visit to Zabar's I unearthed these unique-looking, wax-paper wrapped, round blocks of Taza chocolate. Upon further examination I noted that their intended use was for making hot chocolate. SOLD! I threw two in my basket and carried on.

I had all but forgotten about their existence until today when Izzy decided to venture into the yard in the freezing cold (reality, there hasn't been much hot chocolate weather has there?). Digging in the freezing dirt was so engaging that I was only able to drag him back inside with the lure of hot chocolate. He reminded me of the blocks and so I opened one.

The package had the very simplest of directions: Break one piece of chocolate into one cup steaming milk, or water and whisk until frothy.

The block consisted of eight pieces so I cut off one and followed the instructions. Izzy assisted and we both watched the floating Z, looking rather lonely in the pan. 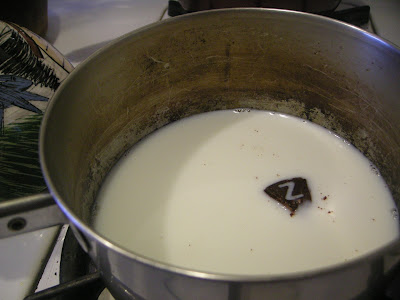 I whisked it vigorously and the mixture became quite frothy but remained ultra-pale. Izzy and I were both waiting for the mixture to miraculously darken but when we realized it wasn't going to, I poured it into our mugs. 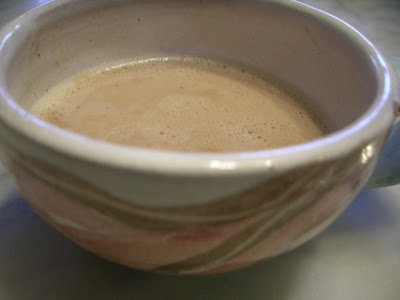 I sipped the mixture which bore little resemblance to hot chocolates I have known (worthy of their own treatise to be sure). I tasted hints of chocolate and cinnamon and the beverage was certainly warming but I would venture to say that we didn't use an adequate portion of the block.

Izzy didn't seem to mind, nor did I. But hot chocolate it was not so I am awaiting a response from the company as to the correct portion size and hope to report shortly. 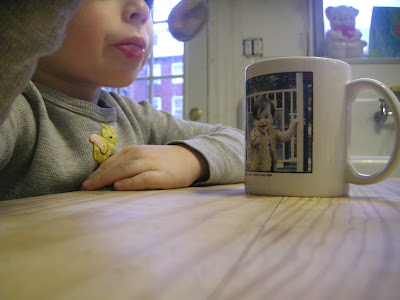 It's definitely hot chocolate weather here in Indiana today. I have tried a ton of recipes but never seem to have just that perfect cup...the hot choc as a kid can't be replicated!

JEP: I don't know what you drank as a kid but I don't miss what I had. I grew up drinking the Swiss Miss or Hershey variety and now I don't like them at all. I became spoiled once I encountered hot chocolate in Paris and later at City Bakery. A whole new world of hot chocolate emerged.

The tablet in the photo looks very similar to Abuelita hot chocolate, which I was addicted to a few years back. Just increase the chocolate ratio to taste. And add a little vanilla. Abuelita, by the way, is available in most Mexican-run bodegas and is very cheap. Not sure about the healthiness of its contents though. I've switched to pure cocoa powder and sugar, so I can control what I'm drinking.

That chalky bar chocolate has never yielded any great results for me. Personally i have always been a bar snub but I just made a switch after feasting on a tasting at Whole Food's from Allegro (the Colombian variety). It is divine. I have to fess that my secret ingredient in making hot cocoa is (I can just imagine the face of disgust you are about to make) evaporated milk. Don't mock it until you try it. It makes an incredible difference in taste. I use only evaporated milk and follow the instruction on the cocoa package and just when I turn off the fire I add a bit of vanilla to taste. Never any sugar. The slight sweetness in the evaporated milk takes care of it. It is best if you can steam it in an espresso style machine if not you can use two cup to whip up some foam and best dissolve all the powder. TRY IT before you give me that look of disgust.

If the taste is too much for you you can always try equal parts cow milk and evaproated milk. By the way the cream cheese is half gone and there will be no freezing of the sesame twist as it is all in our tummies.

Evaporated milk does not disgust me.. Can I buy organic? I have probably used it for some sort of baking project. I will definitely give it a try if I can find an organic one.

How many cream cheeses next time? It is good on that sesame twist, right?

That 'Z' does look a little lonely in there...