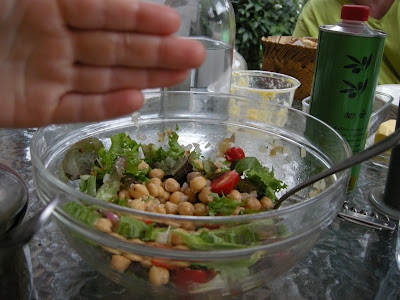 It all starts here.

For several months now, on a bimonthly basis, I have been receiving deliveries of "real milk", eggs, cheese and other "fresh from the farm" goods, including ground beef. Every so often, there is a glitch in the delivery and I am either missing something or have received something that doesn't belong to me. This time my ground beef and cup cheese had gone missing.

The cup cheese had been replaced by butter and the ground beef had been left behind and since I don't have a car, I figured that I wouldn't be seeing it any time soon. Enter D., the organizer of farm affairs. Being a faithful reader of my blog, she seems to have taken a fancy to Izzy and me.

Late this afternoon, she called to say that she would be making a special trip out to Jersey City to hand deliver the beef. I explained that it was not urgent but she insisted. When it occurred to me that she and her husband would be arriving at the dinner hour, I invited them to join us.

Though I have never met D. before, our dinner was meant to be. Yesterday I had defrosted and marinated a large package of venison steaks (a gift from my brother's property) with about five servings, not knowing who would eat them. 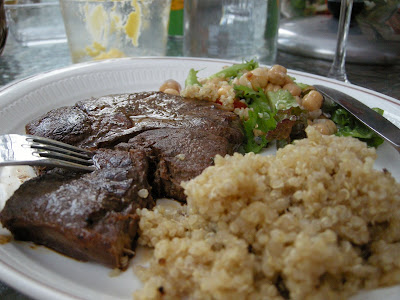 They called only about an hour before dinner so I had to rustle up some side dishes to accompany the grilled venison. I prepared a quinoa pilaf and a chickpea, grape tomato and lettuce salad.

When they arrived we immediately settled in the yard where D. surveyed our garden. She brought along gifts of lemon balm and pineapple mint which will fit in perfectly with the add assortment of things I have growing. She also brought some chopped lovage which I have no idea how to use and dried mushrooms which are always great to have around the house.

As we chatted and awaited the venison, I was sure to put out plenty of bread and butter. Since it was rather late for Izzy, he began his meal with the bread and butter. I watched in amazement when D. showed me the gobs of butter that other disciples of the Weston A. Price Foundation slather on their bread. I can only take the raw butter in small amounts as its gamey taste can be a bit overwhelming. Can this really be healthy? I'd like to believe that it is.

Meanwhile, A. was in charge of the meat. So while I chatted, he cooked. The grilled venison, which had been marinated in red wine, rosemary, olive oil and shallots, was tender and flavorful though a bit overcooked (our propane tank emptied during grilling time and the steaks had to be finished on the stove).

Throughout the meal, A. listened skeptically, as D. and her husband touted the virtues of saturated fats, including coconut oil and heavy cream. Not one to believe in extreme dieting of any kind I am sure he found some of their ideas outlandish.

1. The dried mushrooms: we use them to make Chinese or Korean food. Just soak them in water for a bit before cooking with them. In fact, we go out of our way to buy dried mushrooms in HMart or Chinatown or Ridgefield Park.

2. I'm surprised that you buy ground beef. We haven't bought ground beef in ages. It's all the nasty bits. Why not buy your own cuts of meat and grind it yourself?

Anon:
1. I made a mistake in the post. I meant to say that I didn't know what to do with lovage. I love dried mushrooms and use them for soups and stuffings.

2.I have contemplated grinding my own beef but have never gone through with it. Do you have a meat grinder or use a kitchenaid attachment? Where do you buy your meat? I feel secure enough in the provenance of this beef to know that it comes from one cow, in fact the batches are labeled as such. I don't mind nasty bits as long as they come from one animal. I am an offal eater.