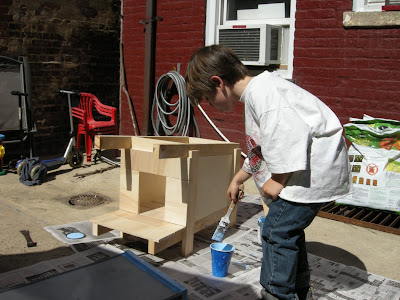 Did you know that 'cat house' was a euphemism for brothel? Me neither but somebody pointed this out to me when I kept talking about the one we were planning to build.

Anyhow, the cat house is the latest in our scheme to help out "Mama", the pregnant cat who hangs out in our yard. Even though she doesn't live inside our house, I think of her as mine. After all, I do feed her three times a day which has to count for something.

I am not sure if the cat house is the solution for Mama but as of now, I have no other. I considered taking her in but as she is pregnant she can't receive anything other than a flea treatment which would leave us susceptible to ringworm. She would also need to be sequestered from us and litter-trained and right now our house doesn't lend itself to that.

I thought about trapping her and taking her to the shelter but I don't like that idea because they will "take care of" the kittens. A. argues that she is wild and we should just let her be. The cat house is our compromise and A. kindly offered to build one.

He put aside his work on Sunday morning for project cat house with Izzy. Later it was my job to help Izzy paint it. Izzy chose the light blue and yellow and his original design included yellow polka-dots. The painting took so long we put the polka-dots on hold. 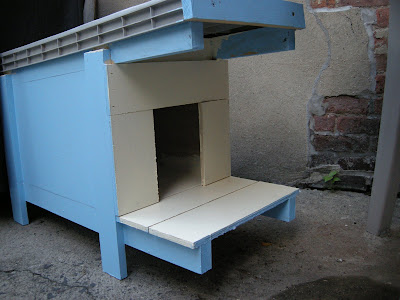 It looks remarkably like a Cape Cod dune shack now.

Last night, we placed her food on the porch and she ate, but did not venture inside. This morning, same story. Tonight yet again. Will she ever try out her new abode? What about her babies? Any chance she will have them inside?