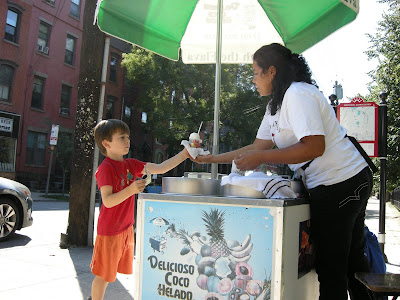 We managed to bypass the ice lady and the ice cream man for all these years. How is that possible? I'm not exactly sure. The ice cream man makes his rounds to both sides of Hamilton Park and in front of our house on a daily basis. Even though his friends eat it he never really asked for it. Maybe once or twice he mentioned it but I nonchalantly explained that it was made of chemicals and that we didn't eat it.

For most kids, the ice cream man's jingle is cause for celebration. For Izzy it is cause for irritation as he admonishes from his bedroom window, "Shut up you stupid ice cream man. I am trying to go to sleep!"

As for the ice lady, well I just told him that ices were too sugary and we didn't eat those either. But lately I have changed my mind. Yes, that does happen occasionally. His friend I. had been eating ices in front of him over the past week and when Izzy asked why he couldn't have any I couldn't come up with a reasonable answer. When I examined the goods I decided that the coconut flavor appeared benign enough..no evil food coloring at least.

So I handed him a dollar and let him run off with I. and I. to give it a try. We shared it and we were both hooked. Which is precisely what I was afraid of. Now he seeks out the ice lady on a daily basis, and we have eaten it three times since. The second time we discovered one could combine two flavors in a small size. We tried tamarind and coconut. Today it was coconut and mango (too fake). Not the worst habit to have but still...

Every day since his first taste I have been asked, "Do you think the ice lady will be in the park today?". I feign ignorance, knowing full well that as long as summer is here, the ice lady cometh.
Posted by Izzy's Mama at 9/01/2008 10:17:00 PM