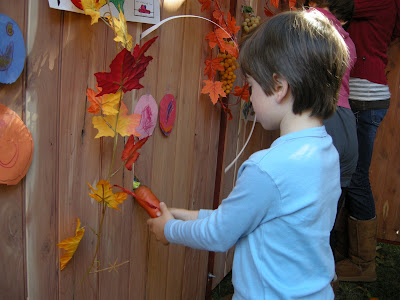 I guess Hebrew school is a fitting place for a first encounter with a bagel button. In my day, we just ate the whole bagel, hot from the oven of the nearby bagel shop. Eating that bagel was an integral part of my Hebrew school experience. Will the bagel button be a regular part of Izzy's? That shall remain to be seen.

As I sat watching Izzy and his classmates snack on bagel buttons and juice, I had to ponder their very existence. Are they akin to the Dunkin Munchkin? Do all bagel shops sell them? Meanwhile back to the other Hebrew school food oddities...

This was no ordinary Sunday at Hebrew school for we were also there to celebrate Sukkot, a harvest holiday, and decorate the sukkah. 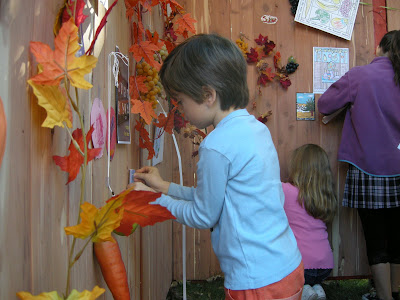 The sukkah is a hut-like structure, decorated with fruits and leaves. It is traditional to eat inside it, throughout the holiday. We expected to have our lunch inside the sukkah that afternoon. I had no idea what would be served but as you might imagine, I feared the worst.

We were all milling about outside when a stack of pizza boxes arrived. I was certain it was a joke but then it quickly dawned on me that this was the reality of a Reform Synagogue in a multi-cultural city. Pizza and salad? I could certainly manage that it was the beverages that had me in a tizzy. I tried to ignore the giant plastic bottles of soda set out nearby, instead plying Izzy with far too much grape juice.

When the festivities were over, Izzy and I took a nice long walk down Kennedy Boulevard, to the Journal Square Path Station. On our way, Izzy started asking about his teacher Yoni, and was already looking forward to next week's class. And perhaps the bagel buttons. It was an auspicious beginning.