The Lonely Only Kitten 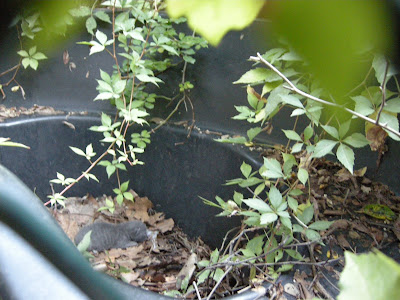 One of the first things that A. did upon his return was to go out into the yard and check on Mama. Since he is taller than I he had a much better vantage point from which to peer through the vegetation. He immediately noted that there was only one kitten curled up beside her. I had been hoping that others were hiding beneath her and I wasn't quite ready to believe him. I don't even want to think about what has befallen the others, I guess a similar sad fate as the one we tried to save.

I finally called up one of the Jersey City cat mavens to discuss how to proceed. She advised me to wait until the kitten is about 3-4 weeks old before I attempt to capture it and the mama. We came up with a tentative plan, provided nature doesn't take over. Meanwhile I am to continue feeding Mama and checking on the whereabouts of the baby.

So imagine my surprise upon finding this little gray bundle*, left solo this afternoon, snoozing away in this discarded fish pond. Where has Mama gone? She didn't stop at my kitchen. I checked for about an hour and then it became too dark. How long can that tiny creature remain alone? Let's just hope that Mama has made it back home by now, otherwise that poor thing will freeze.