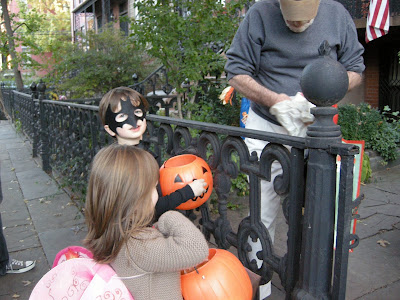 Into thinking that I could get away with one more year of no trick-or-treating. Up until today, he seemed thrilled with just the prospect of wearing his costume and handing out candy on our front stoop. This morning he asked if he could invite friends over to hand out the candy with him. I explained that his friends probably had their own candy to hand out at their houses. Then I regretted not having a small Halloween get together which I had contemplated but couldn't bring myself to do. After last year, I wasn't really in the mood.

Later on today, when school let out, we came home and prepared our treats. Then, with his costume on, we brought everything out to the stoop. We had organic lollipops, freshly popped popcorn and other organic candy. I also made the most adorable Halloween treat ever (leftovers available if you are in the neighborhood tomorrow!). 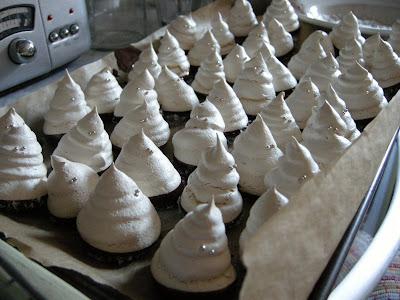 These ghosts will definitely become part of our Halloween repertoire. We will make them a tradition at our Halloween party next year.

There we sat, trolling for trick-or-treaters but few were coming our way. I could see Izzy would tire of this soon enough. Finally T., one of his classmates, came by and I decided it wouldn't harm anyone if we joined them to trick-or-treat at a few houses. My little bat boy flitted down the street, eager to ring bells and accept candy. After about a half an hour of this, he was ready to go home.

Once there, he promptly dumped out his loot and began to count it! He had over 60 pieces of candy. I explained to him that when I was little, my parents had the right to check over and discard anything that wasn't so good..like candies made in China, those with excessive food-coloring, the ones with sketchy labels.. He gladly handed over nearly half of the candy and was even on board with the one piece a week plan. Not bad for a first Halloween. 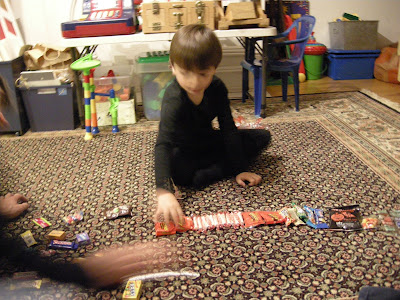 Thank you for the beautiful ghosts! They were deliciously complex.

those ghosts are FANTASTIC!

E. You are quite welcome.