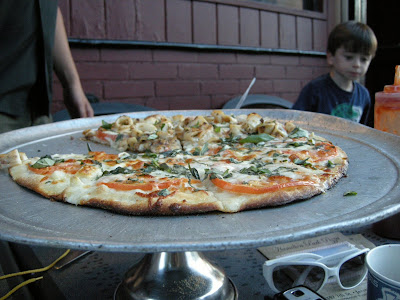 Ask around JC about pizza favorites and everyone will give you a different reply. A recent thread on jclist, a local website is a case in point. The answers vary wildly, offering up places which true pizza aficionados would barely consider. Therein lies the danger in putting faith into a group of uncredentialed tasters. Instead better to read some reviews and then listen to me, longtime seeker of pizza perfection.

Because I live in the downtown area, I cannot speak for anything outside of walking distance, which eliminates far-flung neighborhoods like the Heights, Greenville etc. Perhaps there is decent pizza out there but you'll have to read about that elsewhere. We don't have a car and the beauty of having great pizza nearby (generally speaking) is to be able to walk to it or have it delivered quickly.

When I first moved to the Hamilton Park area, I was somewhat stumped as to where to find decent pizza. I quickly discovered Lombardi's and went through a long honeymoon phase, whereby the pizza could do not wrong. There were Wednesday lunchtime jaunts for 1/2 price pizza. It became a ritual following story time at the main branch of the library. Our small stroller brigade would weave its way along Newark Ave, slowly inching toward our personal pizzas, perfect for one grown-up and a toddler. I was partial to the Margarita and Izzy and I looked forward to those lunches. Until one day, they decided that Margarita pizzas were no longer 1/2 off. Only the other pizzas. This mandate soured me a bit and the honeymoon phase was over but we continued to return, since their regular pizza was worthy too. Thin crust, flavorful sauce and much better than anything else around.

Then one Super Bowl Sunday (no cause for celebration around here, just notable for this incident), I made the big mistake of ordering pizza (note to self, NEVER order take-out on any sports occasion). As you can imagine, the pizza was long in coming and when it finally arrived, it tasted as if it had some type of jarred Cajunesque sauce on it, as if they had run out of ingredients. It was truly one of the worst pizzas I had ever eaten.

I gave them another chance, given my past experience. But from then on, the pizza was never the same and I had to eventually seek out something better, which was a good thing, since Lombardi's eventually closed.

Finding a replacement was difficult. When I asked around, I received a few disparate responses and did a small taste test, pitting Stella's against Frank's (Mamma Mia), both just ordinary pizza joints. I had not tried either one but surprisingly found Frank's to be better. This was unexpected simply because I associated Frank's with the sight of teenagers loitering and littering the surrounding area with paper plates and pizza detritus which led me to assume that the pizza was large but not so good. In fact, Frank's does offer a decent slice, nothing earth-shattering but the medium-thin crust and better-than-average sauce help staunch serious pizza cravings if you are on a budget. Izzy and I would share one slice and have a bargain $2.00 lunch.

Frank's filled our pizza cravings for awhile, but it wasn't the pizza experience I sought. I dreaded the days when Izzy would ask to eat there, with the T.V. blaring in the cramped space, it was certainly not pizza nirvana. I longed for a pizzeria where we could sit and relax.

And so went our mediocre pizza existence, until this summer, when not one, but two new pizza options entered our lives. La Rustique (gourmet pizza ilk) opened on Fifth Street and Jersey, and the Hamilton Park Pizza Cafe (Brunswick and 7th) opened under new management. La Rustique has been much touted in the press and has many fans. Hamilton Park Pizza Cafe will definitely offer some seriou competition.

I had heard tell of it a few months ago and scoffed at the notion that it could even compete with La Rustique ( I hadn't heard it had new owners). Then we tried a slice at La Festa Italiana. A. raved that the pizza was better than those he had eaten in Rome (drunken exaggeration) but I tried it and it was more than a step-up from other Jersey City spots and could definitely compete against La Rustique.

This weekend, a group of us dined at the Cafe. We sat outside so we didn't have to contend with the blaring t.v. (What is it about restaurants and t.v.s anyway? I'll save that for another rant). The crust, thin and slightly chewy, drew raves and the sauce was just right. The salads were fresh and the sandwiches were overstuffed and packed with flavor. The owners are especially accommodating and were happy to cook up our innovations. S. ordered up a calamari pizza which I have to admit was a pizza revelation. He asked for it on white pizza, sauteed with extra garlic. A decidedly delectable topping which they should definitely add to the menu. It looked so good that Izzy had a slice of that along with a regular one. When the meal was over, everyone was happy (thanks to J. who read to the kids throughout the entire meal!). Finally, a local pizzeria to turn to on a regular basis.

As a child, we ate pizza nearly every week but over the years and I missed that tradition. Having lived for so long without great pizza in walking distance, I lost the habit. Hamilton Park Pizza Cafe might just change all of that.
Posted by Izzy's Mama at 8/25/2008 08:18:00 PM

Ahh, JC pizza! I remember Frank's - pretty good. And I spent a portion of my labor in Esperanto's (on Jersey Ave, near Van Vorst) with my doula. A little hard to appreciate pizza while in labor, though.

Sarah: Did you sincerely like Frank's or was it for lack of anything better? I never had Esperanto's. Does it still exist? I may have to give it a try for a more in-depth look. I forgot Helen's which I never liked either.

MCA: Thanks but could have been more thorough. I did check out your discussion but all I found were the votes.

We thought Frank's was ok, though it seemed to go downhill before we moved away 2+ years ago. Esperanto's was better, if only because they were so close to our apt. They should still be there... I snuck a slice into the screening of 'The Business of Being Born' 6 months ago!

Ugh, Helen's was awful. We ate there, though, since R. liked the convenience and plentiful seating area. Have to stop at Hamilton Park Pizza one of these days, or stop for a moment between summer rice balls to stuff a slice in. (Even R. admits that much of the Festival Italiana is now about the food!)