Izzy's Megu Meal: All In The Details

It turns out that Megu, in Tribeca, is far more than an haute sushi bar. It is a Japanese dining extravaganza. The menu consists of several books. I believe the server mentioned 12...How many diners relish the daunting prospect of examining those before ordering? It must be the restaurant's method of steering diners toward ordering "omakase"...which in this case seems to be "server's choice" rather than the chef's...They size you up and figure out what you can afford (although they claim they take into account table preferences). Then they just keep bringing out small portions for the table to share. This is an exciting way to eat because one never knows what to expect. Each course is a surprise. 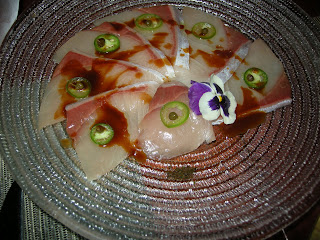 alapeno peppers. It was smoothly delicious with a spicy bite. Izzy tried a piece but deemed it to be too spicy for him. This was followed by panko-coated, fried asparagus on skewers. So impressive to behold I felt sure Izzy would munch his up in a jiffy but instead he claimed it was too hard yet then managed to bite off the tip. Countless courses followed, including a grilled Kobe-beef tasting course. This consisted of skewers of meltingly tender beef cubes, each with a different topping, including wasabi and garlic. There were also Kobe-beef meatballs with an oozing foie gras interior (does it get any more decadent than that?) Miso-glazed cod which melted in the mouth, an enormous lobster, halved with the meat ready to pluck out and then finally some sushi (which Izzy had been eagerly awaiting, only taking hesitant bites of the other small dishes.

In between courses, Izzy occupied himself by pouring roses over the Buddha Ice Sculpture which adorned the middle of the dining area. 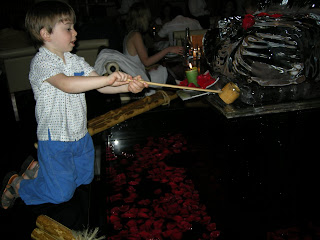 He was completely involved in this endeavor which was fortunate since we were dining out way past bedtime. He had also reached the point where although he hadn't eaten much, he wasn't very hungry so he only had small bites of things. He claimed to be saving himself for the sushi. This theory did prove correct for when the sushi course finally arrived, he dropped his rose petal activity and made a bee-line for the table. The rolls were ultra-fresh and the wasabi was prepared table-side, as the waiter scraped it onto the platter. For Izzy, the ginger was a revelation. 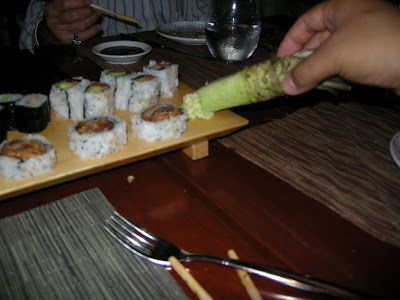 At most Japanese restaurants, the ginger is too bitter for him because it is not freshly prepared. Here it was perfect and he savored several bites of it. As for the sushi itself, the ingredients were not unusual so Izzy ate only two or three pieces before deciding it was time for dessert. I insisted he eat a few more if he wanted his dessert and when dessert arrived he was barely interested in the Ginger Ice Cream. Either he was too tired, no longer hungry or it somehow lacked appeal.

When asked today what he remembered about the meal last night, he said, "The ginger was very good." I suppose that little things make lasting impressions, in food or otherwise.