Not Hard To Love Swiss Chard 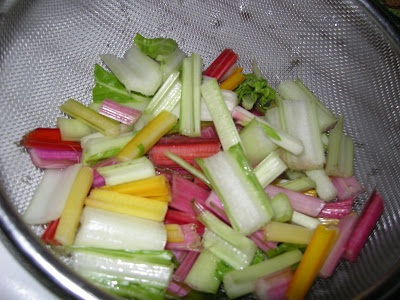 Familiarity certainly does not breed contempt when it comes to vegetables. In fact, with kids it is to the contrary. Kids eat what they know. The earlier the foods are introduced, the greater the chances are.
Swiss chard is a case in point. I had never eaten the stuff myself until we joined our first CSA when Izzy was two. I was happy to discover this new, leafy green with colorful stems (rainbow chard). We received an overabundance of the stuff so Izzy became quite familiar with it. At first he just licked it but eventually began eating it all, stems included. It has since become one of his favorite vegetables.


I prepare it quite simply. I boil the stems for 5 minutes. Caramelize onions in olive oil and then add chopped leaves. Cook for 5 minutes and add stems to heat through.


The batch from last week was quite young and Farmer Rich said it was fine to eat raw. Last night, while I was preparing to cook it, Izzy insisted on munching on the stems. He said that I didn't need to cook the rest but I decided that I preferred them cooked.
Posted by Izzy's Mama at 6/19/2007 10:59:00 PM

no garlic?
trader joe's used to have this garlic concoction in a jar that they discontinued, that was heavenly. (i know you probably don't buy prepared sauces.) It had a bit of vinegar and mustard seeds and things like that, but it was overwhelmingly garlic.
anyway, this sauce was wonderful when cooked with greens (chard, collard, spinach, etc.)
yum.