Arthur's Landing: Where You Can Eat The View 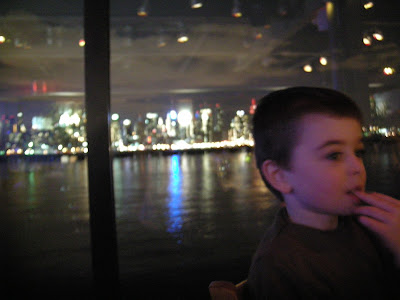 Deciding where to go out to eat with my dad and stepmother often requires several phone calls, some Internet searching, an impasse and then finally compromise and resolution. Should we go out their way to Bergen County? Or should they come to Jersey City (which seems to bore them although Izzy and I could eat at our favorites at least once a week)? Where exactly should we go? What are they in the mood for? What are we in the mood for?

Today I devised a brilliant solution, that we meet somewhere in between. The neighboring towns of Edgewater and Weehawken have quite a selection of decent restaurants. We could rent a Zip Car and be there in a jiffy. I mentioned a few places and then we started really searching. My dad had a steakhouse in mind but when I looked at a few menus, I realized that I wouldn't want Izzy to eat any of the dishes available. Then my stepmother mentioned Arthur's Landing.
I was skeptical at first because I imagined it was one of those cheesy waterfront restaurants, known for a view and not much else.

Instead I found a well-thought out menu which included descriptions of the provenance of most of the meats, from Kurobuta Pork to Painted Hills Beef. This restaurant seemed to be the perfect choice and the discovery that we could get there via Light Rail turned our evening into an adventure.

The Light Rail is pure child entertainment, even if you have nowhere to go but of course having a destination heightens the thrill. It took us less than 15 minutes to get there plus a five minute walk to the restaurant. Once inside, Izzy was sucked in by the sight of the Empire State building alit in the distance and immediately requested a table with a view, which just so happened to be waiting for us. 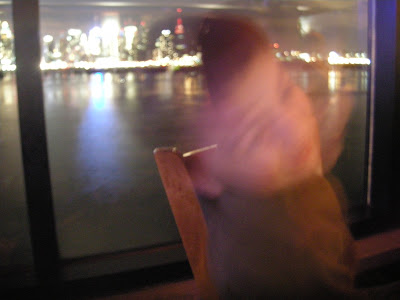 He spent a good part of his meal simply gazing out the window, admiring the buildings and examining the clouds. The only downside for him was the noise which he complained about occasionally. In between gazes, he ate up his Caramelized Vidalia Onion Tart, a perfect kid-sized portion, artfully presented. Followed by his main course, the Sweet Potato Gnocchi appetizer, also a hit and he even had room for a trio of sorbets for dessert.

My 5-Hour Braised Lamb Shank was superb and Izzy demanded several bites. It was ultra-moist, with delightfully creamy polenta and wild mushrooms hidden beneath it. My dad ordered the Painted Hills Rib-eye which was nicely charred on the outside and juicy and flavorful within. Taste after taste, every other dish on our table was inspired and delicious.

In general, I don't favor large, noisy, restaurants with views but in this case I will make an exception. There is definitely a hint of the tourist about the place but it still makes a great spot to celebrate a special occasion or dine out in a group. The noise factor can be a plus if you are bringing kids along, as their voices will blend into the background. Going there would even make a fun excursion from New York City because it would involve a ferry ride.

Overall, this is one place where you can "eat the view" and enjoy it too.