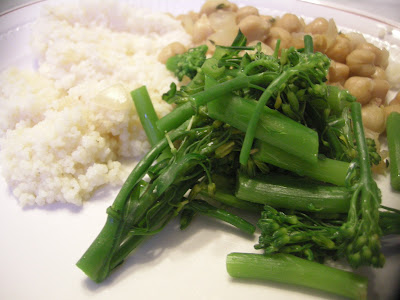 You must understand that I rarely ask my husband to go food shopping because he loathes it so and it invariably takes him hours to find five items. It amazes me how such a brilliant renaissance man has such difficulty navigating food stores. Does he do it on purpose so that I don't ask him? I couldn't say, yet every now and then I am faced with a missing ingredient and I have no choice but to ask. Sunday was one of those occasions.

As I was preparing the venison stew, it suddenly occurred to me that I had no vegetables to accompany the meal. I texted A.. who just so happened to be in nyc and asked him to pick up a "green vegetable or some salad" to go with dinner. I knew he was in Soho so I suggested Dean and Deluca and he refused (he has an intense hatred of many food stores) so I gave him the Gourmet Garage alternative and he agreed.

He arrived home after the stew was already done with a puny little bunch of broccolini, grumbling over its FIVE DOLLAR price tag. I didn't think it would serve one of us so I decided to save it for another day and I served salad instead. When I asked why on earth he had purchased a five dollar bunch of broccolini he claimed that the vegetable selection was paltry and that everything was pricey.

I tucked the broccolini away in the vegetable crisper and figured I'd better not allow it to wilt, considering its astronomical cost. I cooked it up tonight and surprisingly it was the perfect accompaniment to our chickpeas and couscous. I simply blanched it for four minutes and drizzled with olive oil. Our dinner was delicious and despite the five dollar broccolini, I served three plus one lunch for under ten dollars, not bad after all.
Posted by Izzy's Mama at 3/25/2008 09:13:00 PM

The last time I sent my husband to the store, he came home with generic butter. ACK! I think they do it on purpose.

OK, I have to add another comment. Sorry to babble on, but I thought you would be interested ...

Today, when I picked James up from preschool, the teacher who monitors the "lunch bunch" told me she always tells James he has the best lunches. A nice compliment ... but having read your blog, I know his pale in comparison with Izzy's. He generally takes leftover pasta and fruit. What's so exciting about that?

I can only guess that it's because most kids take Lunchables. :(

Eileen: I think some people just lack the food shopping gene. As for James' lunches, apparently leftovers are a step way up from other lunches that kids bring. Pasta is a great lunch and Izzy's lunches are no so different. He takes leftovers too. Sometimes pasta, sometimes tofu, today chickpeas and broccolini. He gets annoyed when I give him too many turkey sandwiches!