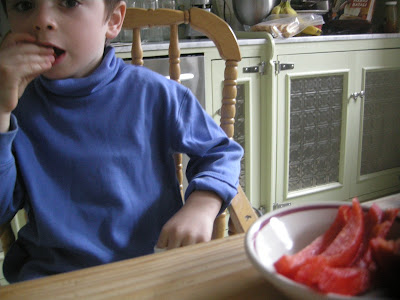 Thank you to the mother who provided a rainbow of peppers for snack time in recent weeks. Izzy cannot stop talking about them. He mentioned stuffing himself silly with them. The array of colors made them all the more appealing. Green, red, yellow and maybe orange too. He mentioned a carrot dip..I wondered what it was. Whatever it was, this snack sounded like a great idea for the kids. It also taught me a lesson.Just because we don't buy it or eat it, doesn't mean that Izzy won't want it or eat it.

Peppers are a special case in which I am guilty of not trying hard enough. You see I used to be wild about red peppers. I especially liked them roasted and then sauteed with olive oil and garlic. I would use them as appetizers, in pastas and on sandwiches. And then A. came along and told me "peppers didn't agree with him." I never quite understood that phrase, which I often heard from my first stepmother or father and I tried to ignore. What does this mean? What does it do to them exactly? Never mind, I suppose I don't really want the details. My policy has been somewhat different. If I like to eat something and it doesn't make me vomit then I see no reason to stop eating it.

I couldn't have been more misguided. Izzy has been deprived of bell peppers and has had a hankering for them since they were served at school. He was positively joyful when I presented a small plate of them to him after school and started musing over all of the color possibilities.

Peppers do make an easy snack and paired with hummus or some other dip are perfect for school or anytime. The rainbow appeal is an added bonus. I will certainly keep them in mind when it is my turn to be snack mom.
Posted by Izzy's Mama at 3/31/2008 09:30:00 PM