Whatever Works: Taking That Yucky Medicine 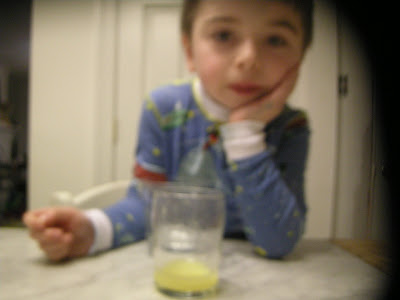 Another feverish day spent at home. The highlight of the day was making homemade bread crumbs, from there it was all downhill. Izzy fever crept up as the day wore on so I decided he needed another dose of Motrin. He flat out refused. He sipped it so willingly yesterday but that was before he knew how awful it tasted.

Today he backed away and said, "I won't take it. It tastes like mud." When he was smaller it was easier to squirt the medicine into his cheek with an eyedropper and hope that he swallowed at least a bit. Now I wasn't exactly sure which tactic to use. I said he could have a bite of chocolate immediately afterwards but he still wouldn't change his stance. Then I remembered the method that worked for his iron supplements. I mixed them into his orange juice and he drank that mixture willingly. I mentioned that to him and he immediately agreed to give it a try.

It is best to use a shot glass for this so that you don't add too much juice. Today I made the mistake of using a small juice glass. I added an equal amount or maybe too much juice so it took him a painstakingly long time to finish it, swigging water between sips. He claimed it tasted like "Gummies" or at least seemed to convince himself that it did. Whatever works...Now he is sleeping and his fever is below 102 F. Maybe I will get some sleep too.
Posted by Izzy's Mama at 3/10/2008 08:44:00 PM