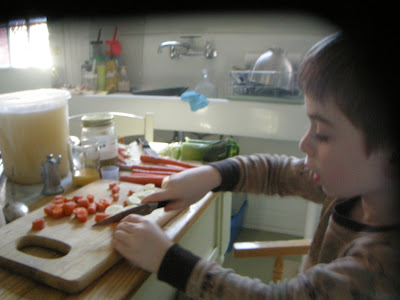 Izzy was sick today; feverish and sneezy. After a waffle and numerous cups of Lemongrass/he took to the couch. I was stuck inside with him and it was just the kind of day to warrant a stay indoors.

My friend R. was kind enough to ferry over some vegetables from Whole Foods for us so that I could make a soup (don't think that her motives were entirely altruistic, I did have some chocolate here she was dying to get her hands on).

When Izzy's fever reached 103 F., it was time to give him some Motrin, something I rarely do. Little did I know that it would work its magic so well that he relinquished his nesting spot on the couch to be my soup sous-chef. What better way to spend a sick day?

He chopped carrots, celery, and celeriac while I took care of the parsnips, potatoes, onions, leeks, and garlic. The large quantity of turkey stock I saved from Thanksgiving finally came in handy. We added some red beans and alphabet pasta to the mix and had an easy, healthy meal.
Posted by Izzy's Mama at 3/09/2008 08:55:00 PM