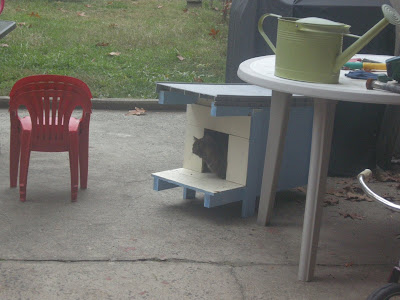 Last week, C., a Jersey City cat rescuer, dropped off a trap so that I could finally capture Mama. She demonstrated how to use it and Izzy took notes.

She also examined the cat house and explained why Mama cat probably wasn't using it.

Ironically, that very night, Mama slept in the cat house and has been using it for the past week. I think C. dusted it with cat fairy dust. Last Friday morning, we planned to capture Mama. Izzy set the trap in the kitchen at breakfast time and I sent him in the other room while I waited. She walked right into the trap with little hesitation and gingerly stepped over the plate. She left without setting it off. When I tried to set it again, she was no longer interested so we decided to wait until this week.

I researched what went wrong and found a fool-proof method for capturing her, the water-bottle method. I also received dozens of emails from P., another area cat rescuer who provided me with numerous details as to how to deal with Mama.
This time I put a huge lump of stinky fishy cat food on a paper plate in the back of the trap. When dinnertime rolled around, she was waiting by the back door. We had everything set up and waited on the side, holding the string. Well wouldn't you know, she wandered in, sniffed at the food and then proceeded to sit down right in front of the trap door, inside the trap. I couldn't close it because it would have hit her in the face. So I waited. She closed her eyes and sat quietly. Eventually, she got up, walked out of the trap and inspected her surroundings. She wandered into the living room to check out Izzy and then went back to the trap.

Before I knew it, she was in the trap. Bang, the door shut and she was in. I felt a bit ill as she writhed about. Somewhat sad and not at all satisfied.

She calmed down after about five minutes and I transferred the trap to the basement. She proceeded to tear up all of the newspaper I had put inside and she managed to fling the stinky cat food everywhere. Izzy was a bit concerned and went to hide in the bathroom. She even managed to drag the sheet cover inside the trap.

I left her in the basement and turned out the light. I have been checking on her periodically. I discovered quite a mess in the trap and despite how stinky it all was, I used the fork method and managed to clean everything up. My grandmother's scarf wrapped around my nose helped immensely!

We have an appointment at the vet tomorrow and then she will recuperate in my bathroom... Who knows what wackiness will ensue?
Posted by Izzy's Mama at 11/10/2008 10:56:00 PM