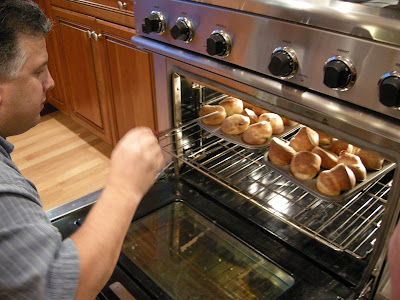 This is the first year I have ever celebrated Thanksgiving with friends, rather than family. No, come to think of it, maybe not. There was the time in Paris, and the time in New York but I suppose it is the first time in the past 15 years. My oldest, bestest friend L., invited us to her holiday table. And what a table it was. In fact there was more than one. There was an hors'd'oeuvres spread on one table, along with a grown-up table and a kiddie table. Everything was set beautifully with harvest-colored table linens.

Izzy stood out at the kiddie table for he was the only one to eat every course. Starting with popovers (which I was surprised to find T. making upon our arrival) on to pumpkin ravioli with sage butter, then salad with goat cheese and dried cranberries. He ate so much before the meal that he was too overstuffed to nibble any turkey. He did manage to squeeze in a some mashed potatoes and a few parsnips but that was about it. 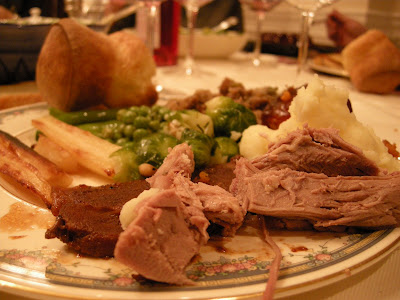 As for me, I managed to heap my plate with as many things as would fit, despite being overstuffed with appetizers as well and keeping in mind that I needed to save room for dessert. While I was eating, Izzy spent much of the festivities zooming around with his friends S. and I. eventually coming to halt with the promise of dessert. There was a nice assortment, including the Tarte Tatin (my contribution) and Auntie S.'s cheesecake. We managed to have a sliver of each.

After the dessert course, I helped L. with a bit of the clean-up, all the while eyeing the turkey carcass on the counter. I suggested to L. that she make turkey soup, especially since I have the recipe right here. She seemed a bit uncertain about the idea and what happened next merits a post of its own, to come tomorrow, but back to my story.

Stuffed to the gills, much later than I thought it would be, L. took us to the train station to make our way home. A fine time was had by all. Poor Izzy was exhausted and needed to be carried much of the way. On our way, he lamented the late hour and dreamed of a day, this weekend, when he could stay in bed until dinnertime. Who knows, perhaps his wish may come true.

My Dad looks pretty good in that picture and by the way why were you so surprised he was making popovers?!