What's With Our Green Banana? Some Strangers Weigh In 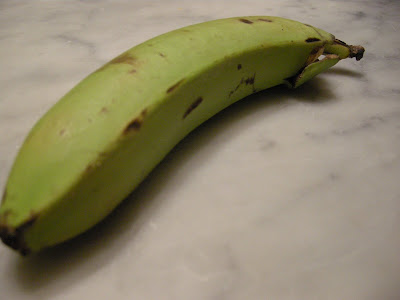 Scene: Path train platform, awaiting the 33rd Street train. Izzy and I are seated on a bench, in between a young woman to the left and a young man to the right.

Me: I have a banana. Would you like the banana?

Izzy: No. Don't you have anything else?

Me: No. Have the banana. It has vitamins in it that you need to help you grow.

Izzy nods okay and I take out the banana. Note that it is green, quite green, despite the fact that it has sat out on my counter for four days. I figured it was just one of those strange bananas that just never turn yellow but are ripe nonetheless. I try to peel the banana and the banana resists.

The woman says: That banana isn't ripe. It's green.

Me: It just looks green. I think it is ripe. It has been sitting on my counter for 4 days. (Then I touch it. It is hard as a rock.) Maybe you are right but something is strange about this banana.

The young man looks over at us and says: That is not an eating banana. It looks like a cooking banana. I am British and from the islands and we cook those bananas.

Me: You mean plantains?

Young man: Yes. You slice it lengthwise, and boil it until tender. With sweet potatoes if you want.

Me: Oh. I thought you fried them. Which island are you from?

Me: (I then launch into some discussion of foods of Jamaica finally getting back to the banana). I don't think this is a cooking banana but I guess you never know.

Young man inspects banana and is then uncertain. He says it looks too small to be a cooking banana after all. The train pulls into the station and Izzy is still hungry. This isn't the first time I have purchased organic bananas that never seemed to get ripen.

I've also read that with a fruit like a banana, buying organic may be environmentally friendly (or maybe not, depending on the grower) but the part of the fruit we eat isn't affected by anything put on the outside, supposedly. Meaning, you can buy conventional bananas without fear. Of couse, this is all subject to the appropriate proof, but this is what I've heard!

Smashley: Bananas from the same bunch are still sitting on my counter, still green. Just bought a bunch of Fair Trade bananas, non-organic.