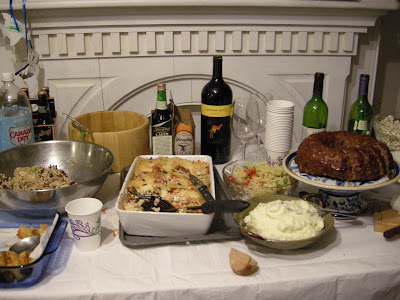 If ever there were a cause for celebration, this election was it. I had to do something and since I haven't hosted a party in ages I decided it was now or never. The idea simmered in my head throughout the week and on Friday evening I sent out the Evite..There was no turning back.

Response was overwhelming and with kids and adults there were over 30 guests. Whenever I throw a party I go overboard, intending to prepare everything, which is why I chose potluck this time, hoping to relieve myself of some of the work. And I kept it fairly simple on my end with herbed popcorn, sliced olive breads, meatloaf, mashed potatoes, and chocolate-banana cake.

The beauty and terror of potluck is you are never quite sure what you'll end up with. In this case I'd venture to say we were fairly potlucky..There was plenty to eat, from a vegetarian lasagne to an Israeli couscous salad. There were two kinds of salads, a few chicken dishes, a pear cobbler, a chocolate layer cake, biscotti and some booze.

In the aftermath, popcorn was ground into the carpeting, I have a hole in my foot from a toothpick and I am left with cake I don't want to eat. The wisest move I made was sending the guests home with their dishes, eaten or otherwise so that I didn't have extra dishes to wash, as I still haven't finished.

Potluck or no, I am exhausted and what I really wanted to talk about was my buffalo meatloaf and the mashed potatoes, but that will have to wait.

I read every page too. It's nice writing and reading it gives me great pleasure. I would love to cook moor locale/organic as you do. And you have a wonderfull boy who resmebles my oldest. That's why I read every page. So keep on writing.

An Obama victory party! So fun. Even with the clean up.

Better popcorn ground into the carpeting than goat cheese! Your party revealed that a potluck party full of cooks is deliciousness times many.

herbed popcorn?? i want that recipe! sounds delicious. i just subscribed to your blog, can't wait to read all your updates. jenna @ foodwithkidappeal.com

Antoinette: Thanks! Is it hard to eat organic in Rotterdam? Do you know my grandfather came to this country in 1915 on a ship called the S.S. Rotterdam?!

Bean's mun: I was hoping potluck meant less work. Not so sure!

Jenna: Herbed popcorn is quite simple. Herbs, oil, popcorn..Will blog about it soon.