Baumgart's Stole My Heart: A Childhood Restaurant Lives On 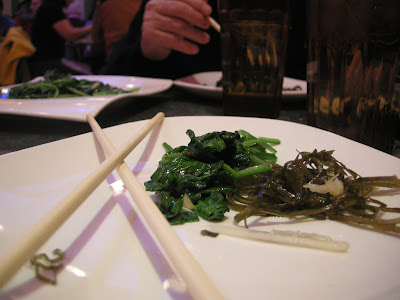 As a little girl, my family did not dine out much, at least not until I was about seven or eight. One of the few neighborhood establishments we frequented was Baumgart's, in Englewood, N.J., a local ice cream parlor/ diner with lovely aqua blue booths. It was naturally retro 50's before that was in. Going there for lunch was a real treat, especially when I could have their legendary homemade ice cream for dessert. I don't recollect their menu offerings back then, aside from the fact that they were of the diner ilk with items like grilled cheese and tuna salad.

Baumgart's existed for about 30 years in its first incarnation and was then taken over by a Chinese family during the 1980's. They renovated the space, keeping the retro feel, and adding a new spin. Baumgart's became a diner by day, Chinese restaurant by night and a winner all around. I became even more enamored of the new restaurant and it is still a place I wish were around the corner. I rarely pass up a chance to eat there, even though I now live a half an hour away. Fortunately, my dad still lives nearby so we still find ourselves there often enough, as was the case tonight.
Izzy is just as enthralled with Baumgart's as I am, and whenever we venture out to eat near my Dad's house, he is disappointed if we go elsewhere. And with good reason. I began taking him there very early on. And as soon as he was big enough, I sat with him at the front counter, complete with soda-fountain appeal. It is just right for nibbling on a quick lunch or a great sundae. 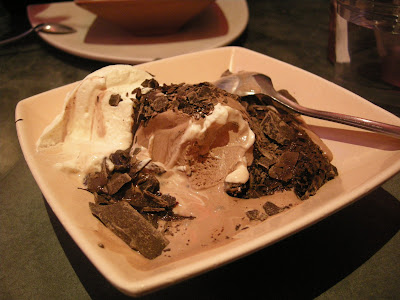 Baumgart's food, whether Chinese or American (and now Japanese too) is comfortingly delicious. Chunky chicken sandwiches rub elbows with sizzle duck crepes and it's all good. We are generally creatures of habit when we go and I return to the same dishes over and over. Shrimp with shallot chips never fails to please. What's not to like about plump juicy shrimp showered with excessive amounts of fried shallots? And the BBQ spare ribs and dumplings? Steps above any Chinese restaurant aside from the haute variety.

Tonight, Izzy couldn't get enough of the Warm Chinese Spinach with garlic, a dish that appeals to all generations to be sure. For a change of pace, we all ordered sushi this evening and it was perfectly presented and fabulously fresh. It is challenging to eat lightly at Baumgart's since there are so many tantalizing dishes. We were trying to save room for dessert because no meal at Baumgart's is complete without it.

They usually have an array of baked goods on hand but the homemade ice-cream is what I crave as it is my benchmark for all others. They offer a few standard flavors and one weekly special. Their sundaes are incredible, chock full of gooey fudge and showered with chocolate shavings, a dollop of whipped cream on top. The one pictured is known as the Strong-Man and it is difficult to finish alone, which is why I ordered the mini-version this evening. Izzy didn't wish to share since he was eating his own black raspberry cone.

Every neighborhood needs a restaurant like Baumgart's, even when I lived in New York City, there was nothing else that came close. As it turns out, the owners have actually expanded throughout Bergen County. There are three other locations with a fourth one in the works. If you are lucky, there may be one near you, though I doubt it will measure up to the original.
Posted by Izzy's Mama at 11/18/2007 09:18:00 PM