Helzel: It's All About The Neck 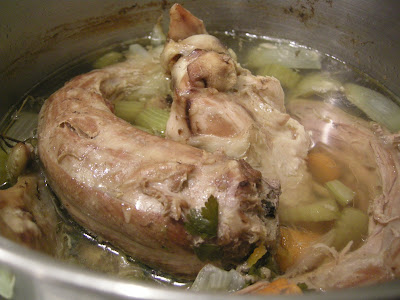 My grandparents spoke Yiddish while I was growing up. It was their secret language, used when they didn't want us to know what they were talking about. Long after I was supposed to be asleep, I could hear their hushed voices out in the den, their conversations punctuated with the words "ze kinder" (the children), a sure-fire tip-off that they were discussing something relating to my brothers and me.

Their English conversations were peppered with Yiddish words were often food-related and I can just hear my grandpa discussing the "helzel" (neck) around Thanksgiving or whenever it was we had some chicken or turkey necks stewing about the house. I was fond of the helzel and particularly relished prying out the bits of meat in between its tiny bones. It was tender and soft and now I imagine it would make some fine rillettes. Turkey rillettes? Do those exist? If not, they should but I digress.

When I went to purchase my turkey this year, I made sure to ask for an extra neck and some wings so that I would have an intensely flavorful turkey stock for the gravy. In fact, the highlight of my Thanksgiving preparations was making this broth, which piqued Izzy's interest in necks of all kinds.

He watched as I removed the neck, wings and giblets from the broth and when he saw me nibbling at the neck meat, he immediately followed suit. There we sat, just picking away at it, Flintstone style. As he nibbled he asked, "What part of the turkey is this?" I told him it was the neck and then discussion turned to necks in general. I didn't think that he could actually conceive of what he was eating and I wanted him to have a more concrete idea.

Short of taking him to a farm to watch turkeys or chickens, the best I could do was show him a video. And I knew just where to turn. I have just recently discovered Ms. Glaze, a fetching young woman who lives, cooks and blogs in Paris. Her blog features a few video clips, one of which has her explaining how to debone a chicken, head and neck included. What better introduction could there be to how animals become food?

I had no idea how he would react to the viewing so we sat to watch it together. He was simply captivated by the entire experience, especially since we have no t.v. and he has limited access to websites and such. He immediately requested a second viewing and his since watched it almost 10 times.

Does this mean he will be an expert at deboning a chicken some day? Or does he merely like watching Ms. Glaze? Whatever the case may be I am happy to indulge his interest in helzels and Ms. Glaze. But I do have to be careful. I left him alone with Ms. Glaze tonight and when I returned he had tuned in to her sausage-making video. "Mama, can we make our own sausage?"
Posted by Izzy's Mama at 11/24/2007 11:13:00 AM

That is hysterical! I'll have to check her out.

A couple of years ago we'd ordered a heritage turkey and gotten a code where we could go online and watch the webcam of the turkeys pecking about the field. I thought it was the coolest thing to share with my god-daughter, who was then 5-1/2. I thought she'd love being able to see "her" turkey. But, alas, her mom didn't so much agree. Come turkey day she wouldn't touch the turkey. See . . . Izzy is so evolved!

I think that many kids get turned off to animals when they actually make the connection between what they eat and the live creature. I have always explained it to Izzy because I want him to have a clear understanding. I don't want him to be surprised. Who knows what may happen when he gets older. I will keep my fingers crossed.