Why Why No Pumpkin Pie??? (aka: Not Pumpkin People) 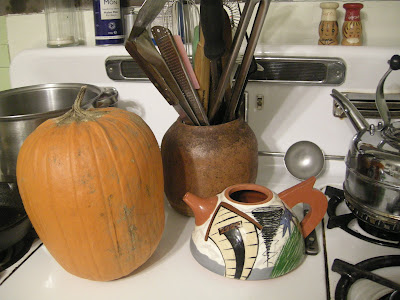 A giant pumpkin sits, lonely and forlorn, left over from Halloween. But don't expect to see it turn into a pie on my Thanksgiving table. I just can't do it. Why? Perhaps I lack the pumpkin-pie gene. Or, more likely, I was not exposed to the pumpkin pie flavors at a tender age, thereby never developing a taste for it.

My anti-pumpkin pie sentiment was spurred on by the lively discussion going on over at Serious Eats. Ed Levine is of the mindset that nobody really likes pumpkin pie (since he doesn't) and readers have been weighing in. Now I don't much care for it myself but I have encountered many a pumpkin pie lover and I certainly have my own theories as to how they came to be.
Simply put, it all goes back to one's ancestry..or if not there, then the childhood Thanksgiving table. Take me for example..Coming from a Russian-Jewish background, pumpkin pie did not figure into my family's repertoire. Not that we had much of a grand Thanksgiving tradition going on around our house anyway, but one thing I know, pumpkin pie was not a player. Aside from a dryish turkey, I have no idea what we ate. My grandmother was in charge of Thanksgiving and as a daughter of recent Russian-Jewish immigrants, she wasn't well-versed in the ways of the pumpkin. I imagine we had apple-pie or something from the local kosher bakeshop. I managed to live my entire childhood without any exposure to pumpkin pie flavors or textures and therefore they never made it into my taste imprint.

Now let's take my husband, on the other hand, who was born into a family who arrived here not much later than the Mayflower. His ancestors were well-versed in the ways of the pumpkin.. He must have pumpkin spices pulsing through his genes. I am sure he grew up with pumpkin pie on his bib and it is one of the few desserts he will agree to eat. It would seem that no Thanksgiving with his family is complete without an array of pies on the table, including the quivery pumpkin.
As long as we celebrated with his family, this never posed a problem. It was only when I began to prepare the meal that I found myself in a bit of a quandry. I did not have the time or inclination to prepare several desserts but wished to please everyone. I couldn't only make my favorites. What was a nice Jewish girl to do?

Then, a few years ago, I stumbled upon this marvelous melding of Jewish/Wasp cuisine:the Pumpkin Cheesecake.... The combination renders the pumpkin infinitely more appealing and delightful than any pie ever could. This incarnation turns the quivery pumpkin creamy and mutes the bold, pumpkiny flavors so that I can finally embrace them.