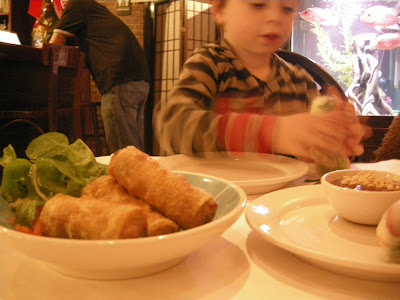 Today was the first really cold day of the winter season. The kind of day where staying indoors with a cup of tea would suit me just fine. We had plenty of things around the house to nibble and I could have rustled up something for dinner too. We did have plans to go ice skating but they were sidestepped by a chore I had to tend to which ended up taking more time than I thought. This, quite understandably, threw Izzy into a snit. I rarely ever break my promises to him and I had to make it up to him.

I suggested we go out to dinner. That perked him up and at his request we went for Vietnamese. Our old stand-by, Saigon Cafe, has gotten a makeover. Some superficial decorative changes were made and the dishes have gotten pricier and smaller. Other than that, things are pretty much the same.

He and I both love the Spring Rolls and Summer Rolls so we started with those. Then we veered from the tried and true and ordered the Tamarind Soup, something I have never eaten. It contained okra, tomatoes, bean sprouts, pineapple and tofu. Rice was served on the side. 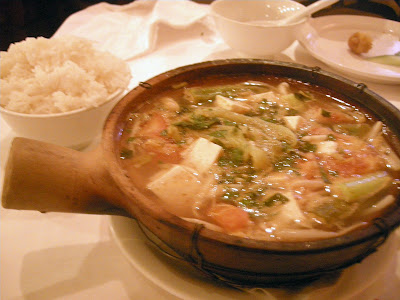 It was sour broth with a spicy kick. We both ate it happily enough but it didn't measure up to the comforting goodness of the Napa Cabbage Tofu Soup we usually order. When we were warm and full Izzy asked, "Why did we have to get a new soup?" He had so quickly forgotten that he had thought it was a good idea in the first place. I explained that it is fun to try new things because we might discover something we really like.