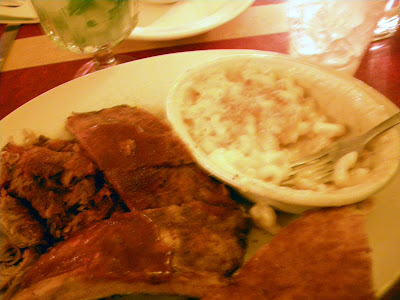 Sounds strange I know but we had dinner at a restaurant called Bone-Lick Park.. The irony of having the Early Bird Special at an establishment thus named was nearly lost on me until my friend R. pointed out that it might not me the best idea for Izzy to go bragging to his classmates, "Guess where I had dinner....?" It took awhile still for me to comprehend, as I was thinking ribs, while she mumbled something about the restaurant's location in the West Village.

Why were we Early Birds? Blame Izzy. With the time change and darkness falling sooner, I usually feel the need for us to be home on the early side, but that would mean giving up any chance of dinner out. The Early Bird Special idea is a way to compromise. We can still dine out, but be home in for Izzy's bedtime.

Instead of snacking from 5-5:30 as we often do after pottery class, we met my friend R. at the restaurant, which I had been meaning to try for awhile. Izzy and I arrived first and were escorted to a perfect corner banquette location in the back. I cannot tell you how important a banquette feature is for toddlers and preschoolers. These seating arrangements allow for adequate room for table antics. Squirmy children can lounge and drape themselves about as needed.

The need for the banquette became more apparent as soon as R. arrived. Izzy decided to play a bit of hide and seek under the table and the seating helped shield him from gawking onlookers. Eventually he settled down enough to order and play some sticker games.

Overall, this spot has a lot going for it, particularly in the kid-friendly department, though you will find plenty of decent options for kids and adults alike. Not to mention a strong mojito which had the usual teetotaling me slightly woozy after only about a 1/4 of the drink, which was all I had.. After all, I had to drive the stroller home.

I managed to get us both home, despite my 1/4 mojito and our trip home went according to plan. What I didn't realize was just how tired Izzy was. When we walked in the front door he turned to me and said, "Mama, you weared me out today." It was a long day, especially for Early Birds.
Posted by Izzy's Mama at 11/08/2007 10:00:00 PM

hi, spell-check here. I believe the
lovely seat you are describing is
spelled 'banquette'. As opposed to
banquet, which is a big meal.
Perhaps, of course, that meal
could be consumed at a banquette,
but probably not. thanks for blogging.

Thanks anonymous, my editor wasn't working last night. I used to be a stickler for this sort of thing but with my tendency to blog into the wee hours I have fallen down on the job. Ordinary spell-check would not catch the error since "banquet" is spelled correctly, just used inappropriately. And this from an English teacher, I am suitably embarrassed to be sure!