Secret Soup (The Last Of The Turkey Chronicles)

My mother-in-law makes a mean turkey soup. The first time I had it was around Christmastime, in England, where she had been spending a year. It was warm, rich and satisfying, perfect for that damp British weather. I remember watching as she carefully removed every last bit of turkey meat from the carcass and later on having the soup appear on the table after a long walk. I didn't actually see what went into it but it had the usual suspects, carrots, celery, onion with some other mysterious ingredients.

Since then, I have had the soup on a few other occasions. Each version has been slightly different, depending upon what is in her fridge. It always maintains a certain unctuosness that I have difficulty recreating. What was the secret? I had to find out.

After making several attempts on my own, and preparing what my husband termed, "Jewish turkey soup", I decided it was time to request the recipe. What surprised me was that the ingredients were very similar to what I had put in the soup. My MIL was clearing keeping a soup secret. A family recipe she was reluctant to give up? My soups always come out clear (like my grandma's chicken soup) and hers seem dark and full of mysterious tidbits.

After actually trying her "recipe" and still coming up short, I asked yet again. This time she mentioned using some of the pan drippings. Yet how is that possible when they are used for gravy? I tried a second time but still my soup was not the same.

When it was time to tackle this year's turkey carcass, I went hunting for the latest recipe but couldn't find it so instead I made this... 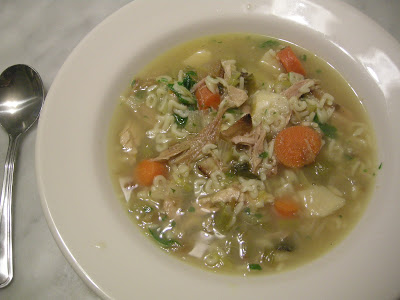 The best part was that Izzy helped chop up all of the vegetables.


1. In a large stockpot, saute onion in a slick of olive oil til translucent. Add other veggies and cook five minutes.
2. Add reserved turkey and then pour in about 1/2 the stock (8-10 cups. You can freeze the other half or double recipe.
3. Simmer for about an hour, then add pasta. When pasta is cooked through, add stuffing.

Damn. I just threw my turkey carcass away last night (we finally celebrated T'giving on Saturday . . . I had the flu last week :-(). My husband even asked, "aren't you going to make soup?" But I just didn't feel like I had it in me, and I'll be honest, I've never really liked my (or my mom's) turkey soup. But, dangit, yours looks really good. Maybe I'll try it with chicken next week . . .

By the way, totally off topic, but if you have a moment, check out www.generouspour.com, a partnership project I've been involved with between Clos du Bois and Share Our Strength, working towards ending childhood hunger in America. There are recipes, entertaining tips and music playlists, along with a full on "party kit" with downloadable invitations, menu templates, recipe cards, votive covers and even donation cards in case you're moved to turn your feast into a charitable fundraiser to benefit Share Our Strength.

And . . . when you download a holiday song on the site, Clos du Bois will donate $1 to Share Our Strength.