Going Nuts: Or Pecans/Pomegranates and Four Hours In The Kitchen 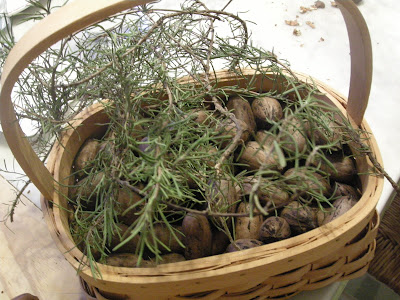 This past weekend, my mother-in-law arrived bearing nuts; to be precise, a basket of pecans, adorned with rosemary branches. Not just any pecans, mind you, but some special type of pecan, sent from Texas by my sister-in-law. And knowing her, they were probably self-harvested or have some other exotic tale surrounding their existence. For my purposes they looked lovely but, truth be told, I couldn't fathom what on earth I would do with them.

Turns out that Izzy had his own nut agenda, which began to unfold during the course of an action-filled playdate with his old friend E. She arrived after school with mom and sister in tow. Their play began quietly enough and evolved into more boisterous fun. From puzzle-solving to couch-jumping those two found endless ways to entertain one another, with little parental intervention.

At one point, while eating some unmentionably icky lunch I had prepared, Izzy zeroed in on the nuts sitting on the counter and was suddenly bitten with the urge to crack some. I located a nutcracker in the far recesses of my pantry and placed it on the table. I demonstrated the method and away they went. Pecan shells were flying everywhere and Izzy and E. patiently shared the nutcracking duties. I missed the most fabulous shots due to severe technical difficulties so my photos only provide a slight inkling of what ensued. 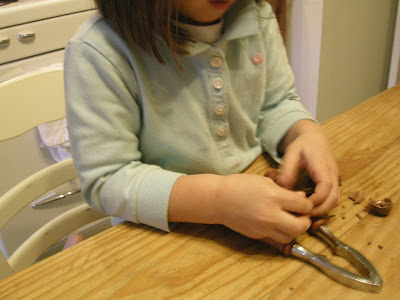 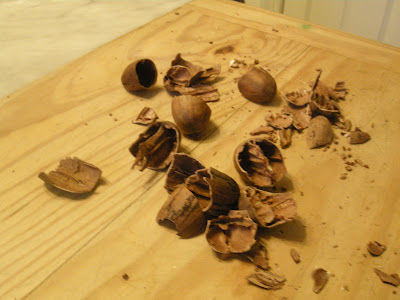 This was only the tip of the iceberg! Nut shards were everywhere. 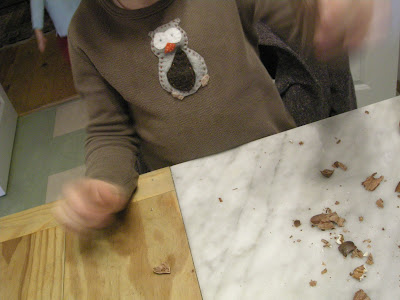 Izzy experiments with nut-flinging. I am sure the resident insects were pleased.

Those two cracked, tossed, dissected and ate until it was time to move on. So back to the living room they went but only for a brief spell. Before long it was snack time..Hey, weren't the pecans a snack? I guess they just weren't adequate.

So I inquired:"What would you like for snack? An apple? Some rice cakes?

E. answered: "Yes apple. I'll have rice cakes too." And then she settled herself into a chair to wait. Izzy joined her at the table. As I turned my back to get out the rice cakes, it was E.'s turn to zero in on something on my counter. (Note to self: clear off counters of food if you don't want kids to indulge).

Before I knew it, she was providing Izzy (and me) with a glimpse into the wonders of the pomegranate. Overheard...She liked to eat them. They were sweet and juicy. She ate the seeds. Her mama cut open the fruit and scooped them out for her. And on it went...She surely did provide a compelling enough argument for opening one. By the time she had finished, Izzy was begging for one too. So from nut shard to... 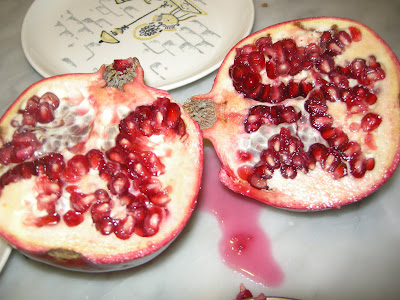 Pomegranate juice..the state of my kitchen was declining rapidly. The pomegranate lesson was delightful for all. E. demonstrated her speedy pomegranate scarfing abilities and Izzy became equally enamored of the juicy fruit. It was a perfect moment of peer influence on eating habits. I tried hard not to cringe when pomegranate juice threatened to stain my marble table..and it didn't!

When and only when, the pomegranate had been suitably picked over, the duo left the kitchen. I had just enough time to clean up when...They came back. It was teatime and they were thirsty. Besides it was time to calm them and tea can have that effect. So I brewed up some mint tea and they sipped it together before retiring, once again, to play.

That didn't last long. Seems dinner time was drawing nigh and little mouths were hungry. In the kitchen again at which point, the only thing I was handing out was crackers.

Then after four hours of kitchen chaos the playdate was over. We were all understandably weary. Good-byes were said. The door was shut and I went back to the kitchen. After all, I had to prepare dinner.