The Remains Of The Day:Notes From A Dysfunctional Thanksgiving Kitchen 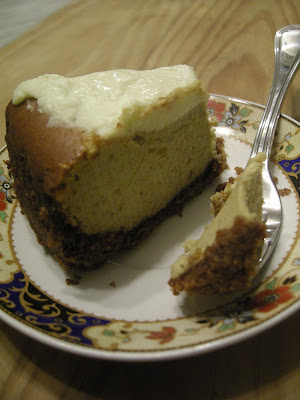 Here I sit, eating the remains of yesterday's pumpkin cheesecake. How I can even go near anything Thanksgiving related, is beyond me, given yesterday's mishaps, which will, if nothing else, serve as lessons for next year's meal, if there is to be one. It all began with the turkey brine..

As you may remember, I decided to brine the turkey, a first time event for me as in the past I just roasted it the traditional way. I left the turkey in the brine for 12 hours and Thursday morning decided it was removal time. Now this was a 15 lb. turkey, bathing in two gallons of potent brine in a rather large stockpot. What possessed me to take this duty on alone, no one can say, but I decided that I would dump the brine and remove the turkey. I picked up the entire affair and brought it to the sink. As soon as I tipped the pot, I splashed turkey brine all over the dish rack and floor, not to mention myself. This was not a pretty sight and being that I am rawpoultryphobic, I had to spend a good amount of time cleansing this mess.

This incident put me in the weeds from the beginning. Once I had the washed turkey comfortable situated on a roasting pan, it was time to get other things going. Now I had managed to do several things the day before, but it wasn't nearly enough. There were sprouts to trim, yams to peel, tatin crust to roll, apples to peel, more apples to peel. It seemed that the list was endless. Even though Izzy spent the morning at the park with with his Papa, I was still miserably behind.

I had initially invited the guests to arrive at four but quickly called to advise them that later was better. All of a sudden I looked at the clock and at it was after two. I had forgotten to preheat the oven and it was time to put the turkey in. The turkey didn't make it into the oven until 2:20 p.m. By my calculations, it would be out by 6:15 and the meal would be served by 7:00 p.m. So back to trying to get everything else ready. Let's face it. I am slow and everything just seemed to be taking longer and longer, while the kitchen kept getting messier and messier.

By the time the guests arrived my kitchen was a complete wreck. At least Izzy managed to set the table and I had a few appetizers out. One of which is always a hit. Nigella's Spiced Nuts. But nuts and cheese were not enough for me. No, I had to also make these Fried Cece (chickpeas) which sounded ever so appealing. Well thanks to Mr. Kevin Weeks, my kitchen wall is spattered with oil and anything nearby was similarly afflicted. He didn't warn me of the dangers of chickpea popping. Nor did he implore the reader to be extra careful when drying the chickpeas.

My nephew, a kitchen neophyte, to be sure, was in charge of drying them and clearly it wasn't sufficient. I tossed a handful into the hot oil and everyone started to run as the entire pan spurted oil everywhere. Granted they were tasty but not worth risking my skin or kitchen. Lesson 1: No Thanksgiving experimentation!

When it was time to remove the turkey, I had a thermometer discrepancy, along with the fact that each reference book I consulted, gave a different temperature for doneness. I took the turkey out but after watching red juices flow, realized that it needed to roast a bit longer. My family were exceedingly patient but I was annoyed. It was getting later and later and Izzy was on the wired side. 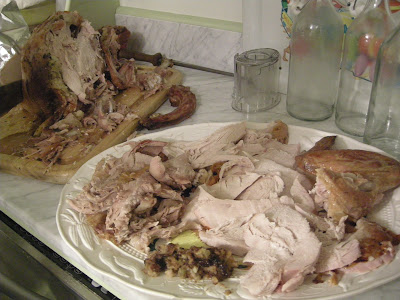 By the time the turkey emerged and was expertly carved by A. (he does have a gift for that, I must say), it was eight o'clock. And in fact, I needed all of that time to get the other side dishes ready. The final menu looked like this:


Sounds good? Doesn't it? It probably was but by the time I sat down to eat, I was so discombobulated I couldn't really enjoy it and Izzy had nibbled on so many snacks he could barely eat more than a bite of everything, even though as he patiently waited, he assured everyone that he was so hungry he would eat it all up.

I might also add that there were nine of us at the table, five of whom were vegetarians. What was I doing with a 15 lb. turkey? Don't ask! Great-grandpa only ate the cranberry sauce. My nephew seemed to only like the sweet potatoes and my brother G. only wanted to eat the squash/kale and bean thingy. How did I find myself surrounded by such a picky bunch?

The desserts, as almost always, were a hit, despite my slightly overcooked Tarte Tatin.

But, all in all, was it worth the chaos and effort? What can I do differently next year?

Last year, on my way home from Thanksgiving out, I decided that this year we would stay home. Our travels were not enjoyable so I made sure to remind myself of this by writing a "note to self" on my palm pilot which would ring the following November 1st. What notes will I write for next year?

The key note (if I can even bring myself to do it again) will be to make everything in advance. When I spoke to my greatest friend and superwoman, L. at about 3 p.m yesterday, she had her feet up and was nibbling on nuts, awaiting her guests. My stepmother also an organizational example, had prepared everything but the turkey by yesterday morning and surely had time to ingest bonbons and primp as she awaited her guests.

Strangely, my sister-in-law (to whom I owe infinite thanks for washing more than half of yesterday's dishes) reminded me that nine years ago, I made Thanksgiving (in my teeny tiny NY kitchen) and transported the entire meal to her house. In fact I have transported the Thanksgiving meal on numerous occasions and it was never nearly as stressful as yesterday. You know why? I made everything in advance!!!!
Posted by Izzy's Mama at 11/23/2007 09:27:00 PM

Did you find the brined turkey worth the trouble? Everything sounded delicious!

Thanks for stopping by my blog -- I'm going to be sure to check yours out, as I hope to raise a gourmand one day as well :-)

Dominic: I really liked the brined turkey, definitely moister breast meat than a traditionally roasted one. I also roasted it breast side down for 2 hours..I think I would have had fewer problems with a smaller turkey.

I'm sorry the Cece Fritos proved so volatile. I think you're right in blaming it on inadequate drying because I've never had that problem.