It's A Scone Thing 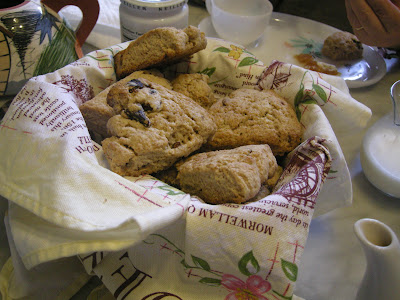 I probably didn't even know what a scone was until I was in my twenties but ever since I discovered their charms, I haven't stopped baking , eating and serving them to practically everyone I know. I usually rotate through a few recipes, depending upon what's around the pantry.

Of late, Izzy has been my willing assistant (having been a part of scone-making since birth he has eased into the role quite nicely). He dumps and mixes, freely turning the mixer on and off as needed. Today he was more than happy to help as we created a recipe to serve to Grandma Jeannette when she came for tea. Our creation was born of necessity since we didn't have the usual ingredients on hand.

I looked to the dried fruit section and found some figs. When I handed one to Izzy to taste and suggested we bake with them, he immediately said, "No!". He then proceeded to pop said fig into his mouth and quickly demanded another. At which point I said, "These figs are awful. We better not put them in our recipe."

Of course he then insisted that we use them and thus today's scone creation emerged: Whole-Wheat Fig-Orange Scones

1. Preheat oven to 425 F. and combine dry ingredients.
2. Add butter, chopped into small pieces and mix until butter is pea-sized.
3. Add figs and mix once to incorporate.
4.Mix cream and egg together, add to dry ingredients slowly, just until dough forms. Knead briefly and form a ball. The trick is to handle dough as little as possible.
5. Cut ball in half and roll out each half into a circle about 5 inches wide. Cut into 5-6 wedges. Roll out second half and do the same.
6. Brush tops with a bit of heavy cream and sprinkle with cinnamon sugar.
7. Bake at 425 F. for 12-15 minutes or until tops are lightly browned.

you know he is quite the little chef tell!!

Mmmmmm...thanks for the recipe. I'm a big scone fan too. One of my favorite combos is dried apricot and candied ginger.

Anonymous..do I know you? Call me a dodo but what is a chef Tell?

Mindful Momma: I have used those two ingredients in scones but separately..may have to give it at try.