Getting My Goat (Milk and Yogurt, That Is)

Everywhere I look I see goat cheese, in one form or another. From fresh in salads, on sandwiches and just plain, there are aged chevres and those with ash, pyramids, buttons, large rounds, logs, both soft rinds and firm.

Considering that goat cheese is so widely available(at least in the NY area), why then is it so difficult to find goat milk or goat yogurt? It seems to be a specialty item, not widely available in this country. There are a couple of brands of goat yogurt to be found at gourmet shops and supermarkets in the area and I have heard that goat milk exists here and there but must be sought after.

All this to say that when I saw that raw goat milk was available from my raw milk railroad, I jumped at the chance to try it. I had initially joined to start drinking raw cow milk but couldn't bring myself to order it right off the bat. To ease myself into the raw milk zone, I chose goat milk, for the simple fact that it seemed less frightening to drink the raw milk of an animal closer to my size. I received a half gallon of the stuff, in a jug marked only with the letters GM smudged on the cover. My plan was to drink half and use the rest to make yogurt.

First we drank it plain. Then Izzy put some on his cereal and the best use yet was in the cupcake frosting. Finally it was time for the true test, yogurt-making. I simply followed the yogurt recipe I have been using, substituting goat milk and goat yogurt for the cow milk components. I made it late last night so once again, the morning excitement was coming down to find if the yogurt had formed smoothly instead of turning into a curdly, watery mess.

Izzy and I were tickled to find the jars looking smooth and fresh. I stuck them into the fridge to chill. Later on I removed one for sampling and this is what I found. Slightly tart, creamy yogurt. 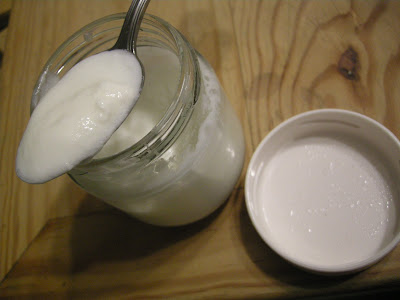 This yogurt tasted wonderful and would certainly be a match for any cow milk yogurt. The question is, why isn't it more widely available. Why do Americans have unfounded goat prejudice. When I mentioned goat milk to my stepmother, L., she scrunched up her face and seemed repelled by the mere thought of it, though I know she doesn't think twice about eating goat cheese. Apparently adults, like children, need to be eased into trying new foods and flavors. Watch how this cheese monger does it:


For Izzy, goat products will just be part of his normal repertoire, nothing out of the ordinary. Which is the way it should be. For in my experience, goat milk cheeses or yogurts may be tart or mellow yet rarely do they have that pungency or barnyardy flavor associated with cow and sheep milk products.

Do you know legal raw goat milk is avail at M & S Farm. Not to far from you in ny.