Putting The Kibosh on Spaghetti Squash?

Who can honestly say that spaghetti squash is their favorite vegetable? Until today I couldn't weigh in on a spaghetti squash discussion, having never cooked or eaten this odd vegetable.
How did that come to be? I am not exactly sure but I never found it on my dinner plate as a child (probably because you couldn't find it in the frozen vegetable section). And then, later when I could and would eat nearly anything, recipes for spaghetti squash held little allure (stringy, watery textured vegetable..., uh,no thanks).
So how then did I find myself with two large spaghetti squashes in the fridge? Well I have Farmer Rich to thank for that. His harvest has forced me into experimentation. The squashes have been hiding in the back of the fridge, awaiting an uncertain fate. Cook or compost? That was the question. I hadn't planned on cooking them tonight but I was cleaning out my fridge and figured, now or never. So I googled and found a simple, straightforward recipe.
I cut the squash into halves roasted it drizzled with some olive oil and balsamic vinegar. When it emerged from the oven I took a fork to create the "spaghetti strands". This is something Izzy took great interest in watching. 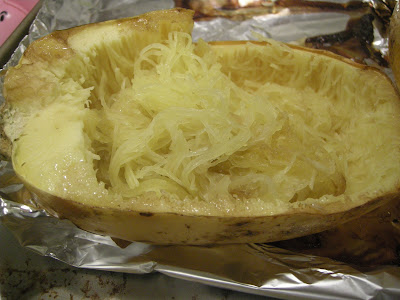 As I fluffed up the strands I was reminded of E., a CSA member who told me of how she could not eat spaghetti squash because she had been scarred by her mother's childhood preparation of the vegetable. It had been served, "spaghetti style" with tomato sauce. Now, examining the texture, I could see why she doesn't go near the stuff.

I needed to add some other ingredients but before doing so, I wanted an unadulterated taste. Verdict? A bland, insipid vegetable to be sure, nothing like its more orangey, sweet butternut cousins. The addition of some butter, olive oil, and Parmesan cheese (I left out the rosemary and added butter) definitely helped to elevate its status to something palatable. But still I would not go out of my way to buy or order this anytime soon, except for Izzy.

He had an entirely different perspective on the matter. He could not get enough of the stuff. He couldn't keep his fork away from the stove, spooning up mouthfuls at every turn. 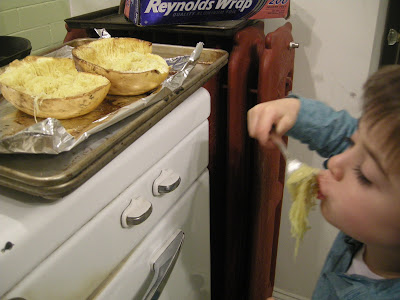 Maybe he lacks for certain vitamins present in this squash. Perhaps he gets the taste for it from the other side of the family. Whatever the case may be, he finished the entire batch. Lucky for him, I still have one more in the fridge. After that, he might just have to wait until next fall before I find myself making another.

I have heard raves and subsequently tried the "tomato sauced" version of s.squash. With a good sauce and fresh mozz., I find it delicious. I'll have to make it this winter to see what the girls think. The Bean is challenging me lately on that "be prepared to serve the vegetable 20 times before they discover they like it" rule, so we'll see...

Beans Mum: I definitely think that if I had drowned the squash with tons of Parmesan it may have been somewhat more appealing but I just don't understand the point. There are so many inherently tasty vegetables that can stand alone with the simple addition of salt, pepper and olive oil. Why spend time preparing something with a questionable taste and texture? Masking its taste with tomato sauce doesn't seem like the answer for me since the texture would still remain.

As for the Bean and veggies, one key is, remain lighthearted or else struggles will ensue.

hmmm.....tonight I am cooking up one of mine. I am in a similar boat- never tasted/ touched etc but heard how wonderful they are from many others....I decided to make a ground turkey tomato and veggie sauce with it and use it as more of a base - wish me luck!

Carla: Please do tell how it comes out!

it was actually quite good (I am from the CSA as well - the girl who was always late the past few weeks) - I sauteed some ground turkey w. garlic, bell and hot peppers (its going to be time for deliveries again before I finish all those hot ones!)added a can of diced tomato and some mushrooms and a little s&p - I boiled the squash (whole - then cut it in half and "stranded it")
served one half of the squash in a bowl with a hearty ladle full of the meat sauce and a sprinkle of cheese
you are right not much taste but since I am trying to lay off the real pasta after a weekend full of M&P mac and cheese (and the risotto that comes w. the filet mignon!) it was perfect

Carla: Oh, I didn't realize it was you! Glad it came out well..maybe I will come around to it some day.

oh I love spaghetti squash! It's okay as the center of a dish, but where I find it's a real star is as a supporting member of another dish. It retains it's slightly crisp texture through cooking very well. My two best dishes with it were a vegetable lasagna where I used it as a layer tossed with fresh thyme and as the texture in a veggie soup. It's lightly perfumey squashiness was delicious!

Ann: You do make it sound appealing. Maybe I shouldn't give up on it just yet. I like the layered idea.

You're thinking about it all wrong. Address the spaghetti squash noodles as if they were Asian noodles. Bake with sesame oil on top and mix the raked product w/garlicky veggies and top with sesame seeds. Yum. D.