Izzy sobbed as we walked down the Path Station steps on our way home from pottery class. He was contrary from the moment I picked him up and discovered that I hadn't bought fish for dinner.

Apparently fish is his favorite food, or so he wrote in an "All About Me" book he recently created. I had mentioned that I might buy some this afternoon but when left to my own devices, I realized that I wouldn't have sufficient time to prepare and cook it so I opted for a roast chicken instead.

When I told him I had purchased a roast chicken he became disconsolate. He scooted along, tears streaming, bemoaning the sad state of his dinner and life.

As he walked, halfheartedly, down the Path steps, he sobbed, "I don't like chicken and I don't like you." A woman smiled knowingly and hurried on as she heard me offer this response: "That's okay. You don't need to eat the chicken and I will always love you anyway because I am your mama." I do hate to see him so upset and clearly something more than chicken was ruining his afternoon.

Finally on the train, thankfully a kind soul gave up her seat for my teary-eyed boy who sullenly munched on a slice of bread. Which was clearly the key to what had been ailing him. Surprise. He was hungry. He was thirsty and he had to pee. As soon as those needs were ministered too, he experienced a revival. He scooted home with a new outlook and a smile.

Once home, I set to making a few sides to go with the chicken. As he watched me prepare he exclaimed, "Yummy chicken. I want a wingy." 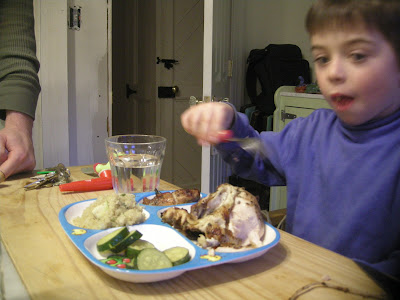