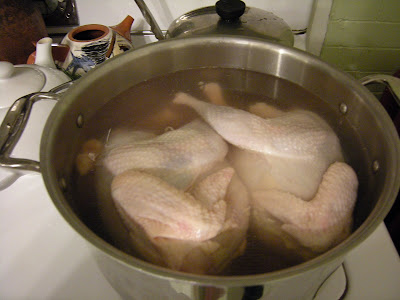 Passover has occupied our thoughts and activities for days now. The night before the first seder, A. asked Izzy what exciting event was occurring the next day and he said, "Passover." His birthday seemed to be secondary despite the fact that he has been looking forward to it since his last one.

Passover took precedence in his mind because he and I spent three days of intense preparation for the two seders we hosted at our house.

The first night we had H., her brother and two daughters. The two year old was none too interested in partaking of the ceremony which was ultra-abbreviated. My guests got a taste of the foods but no signs of the 10 plagues. Which got me wondering how orthodox families manage. What do the little children do during the Seders which can supposedly drag on for hours? Are they fed beforehand? Do they go to sleep? How is one supposed to conduct a seder with small hungry mouths to feed and little voices squawking?

We ended that seder with a birthday candle in the homemade macaroons and Izzy was delighted, especially with his animal gifts.

There were so many dishes after that night I found myself washing them the next day and beyond.

For the second seder, there were nine of us at the table. I was able to extend the ceremony a hair but we still didn't get to the plagues. Since my friend R. was over an hour late there would be no pestilence around here only lots of good eats. To accompany our meal, my friend L. brought along her appropriately dubbed, "seder in a sack". Inside there were leftovers from her seder and some 'special' chickens.

The highlight of both seders was that Izzy managed to sing along a bit with the four questions in Hebrew!! I had been singing them to him for the past few days and I guess he absorbed a bit of them. Also worth mentioning is that Izzy's penchant for gefilte fish only seems to be increasing and he even brought it to school for lunch. As I packed it for him he said hopefully, " Do you think C. will bring Passover food for his lunch too?" I had to explain that most of his friends at school do not celebrate Passover. He couldn't imagine how that could be. He was happy to show his lunch to C. and also share his matzoh during snack time.
Let's see how we manage to observe for the rest of the holiday.
I know A. is already tiring of the brisket and I don't think even I want to eat it one more night. After all that cooking I barely feel like making something else and my fridge is still stuffed with leftovers. OY what's a mama to do?
Posted by Izzy's Mama at 4/20/2008 08:45:00 PM