For the most part I steer clear of recipes with too many steps but I was already smitten before I discovered how involved this one actually was. The mere name of this called to me when I first spied it in the fine print on the bottom of an article about Big Sur Bakery in California in The New York Times Magazine.

When I eventually accessed the article on-line, it was already too late. The peaches and brown butter combination had me hooked. So last Saturday, when Izzy was hard at work I set to work on this three step recipe. I refused to heed A. and his complaints that I had the oven on when it was barely 80 degrees out. For Pete's sake, doesn't he know that 80 is positively cool? I have been known to bake at higher temperatures and I felt just fine.

First there was the crust: I had to brown the butter and then freeze it, before mixing it into the flour. 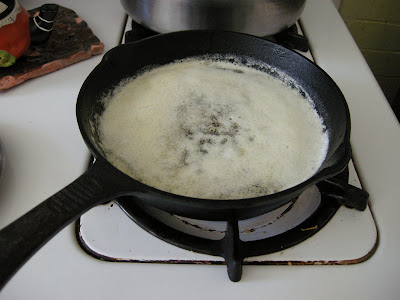 As it baked, I worked on the peach jam which required about an hour of simmering. 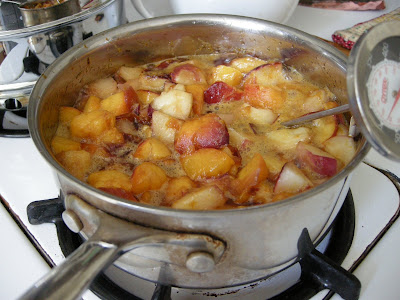 When that was done, I began the filling which included eggs, more brown butter and orange zest. When that was finished I then added the peach jam and the filling to the cooled crust. This is how it looked before it went into the oven. 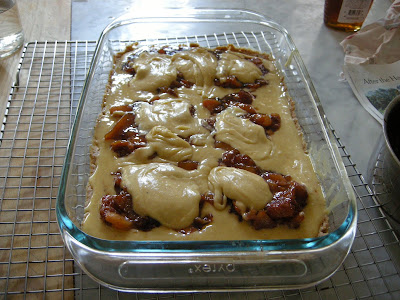 What a gorgeous, portable dessert. Perfect for Labor Day BBQ or to pack for a picnic or snack. This dessert will last, well-wrapped for at least three days. 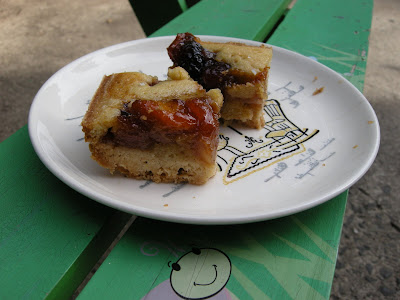 Notes: I recommend adding 1/4 tsp. salt to crust. Cut into smaller squares rather than bars.

These were delicious! In my opinion -- totally worth the endless toil. :)