Not That I Would Ever Make This... 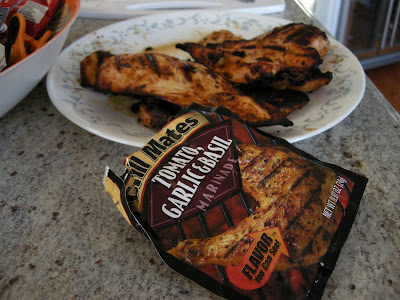 But Izzy had it for dinner and I tasted it. I had to admit, it wasn't bad. At the time, I didn't know what it was, although I suspected there was some type of shortcut involved. Whatever it was, Izzy was glad to have it.

We came upon this heretofore unheard of foodstuff, thanks to G., my stepmother's SIL. G. has three kids and has feeding them down to a science. Granted she doesn't cook the way I do but she does manage to provide home-cooked dinners for them on a daily basis. I observed her in action when she and her family came to visit at the beach.

Everyone was milling about the kitchen and it was nearing the dinner hour. My stepmother was preparing ribs for the family and other goodies but they wouldn't be served until 8 p.m. I wondered how Izzy was going to make it til then, or the other kids for that matter, when all of a sudden, a giant platter of grilled chicken breasts appeared, out of thin air, accompanied by an equally large platter of broccoli. G. presented both and went into production mode, cutting up the chicken breasts into bite-size pieces and serving them with the broccoli. Izzy took one look at the scene and immediately wanted to join in. Soon the four children were all seated in a row, happily eating. And some even had room for ribs and dessert later.
Clearly G. came prepared. She had actually marinated the chicken in advance and then just popped a bag of frozen broccoli into a pan. When I asked her how she made the chicken she mentioned Grill-Mates and I feared the worst. Yet when she fished the label out of the trash I took a look at it and discovered that the major offending ingredient was salt. There are certainly worse things than salt and if using a mix like this means kids get a home-cooked meal, rather than some none too healthy take-out, I would have to vote for this.

Although not something you would find in my kitchen still interesting to know what is out there and what others are eating.
Posted by Izzy's Mama at 8/16/2008 09:33:00 PM

Other than salad dressings and Progresso .soups there is less and less pre-packaged anything that we use anymore.

Baking is not one of my favorite things, I enjoy but there are more fun kitchen things for me, so we do buy bread. Ditto my wife with pasta. If I had more time I would bake more.

Lots of whole canned tomatoes in the basement larder.

There is no intentional thing, nor a 'I'm better because I make it', but we find we are more and more moving away from not doing it ourselves.

We have guests coming for the week before Labor day and I spent the past weekend doing sausages and bacons for ingrediants in the meals.

ntsc: You go beyond in the homemade department, a true role model..I merely dream of homemade sausages but make do with the greenmarket..