A Good Egg: A Day In Williamsburg, Brooklyn 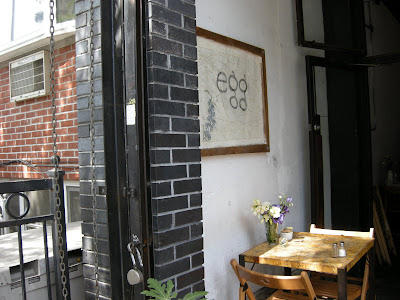 From the moment I heard about it, egg was irresistible. How could I not be attracted to a place which devotes itself to American breakfast, using organic, local ingredients? No matter that I would have to breakfast in Williamsburg, Brooklyn, which isn't exactly around the corner, breakfast is served until three.

The existence of egg is old news, years old in fact, but thoughts of that breakfast remained in my mind and surfaced the other day. I called my friend R. and said, "We are going on a jaunt to Williamsburg, Brooklyn tomorrow, to eat at egg and wander around." She was immediately on board as I explained that not only would there be good eats but great shopping.

It is a super quick trip from Jersey City. We took the Path to the L train and were there in about 40 minutes. We agreed to wander first in order to build up an appetite.

Our trip was not all about the food. Williamsburg boasts several kids' shops and our shopping radar led us immediately to The Flying Squirrel. This welcoming store is ideal for mamas and babies, up to age/size 5-6. There is a great selection of both new and used items. Kids can play in the back room (and play they did), while the mamas rifle through the exciting finds. My friend R. were fighting over the sale items, squealing as we unveiled yet another "find". There are even a few adult sizes and Izzy and I were both thrilled with the unique back to school clothes I found for him, in the new and used sections.

We finally dragged ourselves out, bags full and made our way towards our late breakfast, when we happened upon another beckoning children's store, Sweet William. I tried not to stop there but R. and I couldn't help ourselves. The artfully arranged toys and clothes were both lovely to behold and touch, fine fabrics being the order of the day. Izzy and his friend M. had fun playing with some strategically placed playthings while R. and perused the beautiful offerings. We both found a few things and then it was finally time to move on to eat. 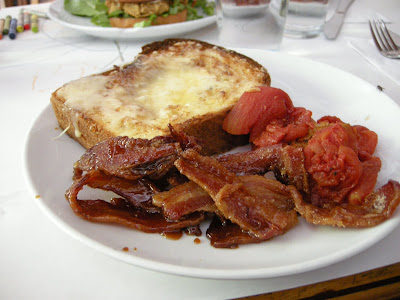 Candied bacon....Need I say more? Mine accompanied a lovely platter of egg in brioche with cheddar cheese. The bacon is addictive and I watched as Izzy's friend M., turned a side order of it, along with a salad, into her meal, leaving her poor mother to finish her fried oyster sandwich. Meanwhile Izzy scooped up his artisanal grits and eggs, though was less than wild over his homemade sausage patties which were a tad to peppery for him (not for me but I had to try not to finish them). R. ordered pancakes, which I would shy away from at a place called egg but they were better than expected. Aside from a somewhat unpleasant server, our meal was delightful.

When we finished, we managed to find a nearby playground since the kids deserved some entertainment after enduring a bit too much shopping.

Now that you know about egg (if you didn't already), no reason to wait to go. Hop on the L for a great day of shopping and eating. We will definitely be back soon for egg's lunch menu and to check out the women's shops, which are supposedly pretty great too!