Consider The Lobster: A Shore Thing

I love lobster, preferably in the form of lobster salad. Yet every so often, when I am near the beach I get an inexplicable yearning for the whole creature. I'm not quite sure why since the eating usually involves a struggle of sorts, between me and the lobster as I try to wrestle every morsel from its crevices. I always question whether it is worth the effort. Somewhere in my lobster fantasy, the meat will be tender and easily removable from the shell. It almost never is.

My most recent craving struck on our visit to Long Beach Island a few weeks back so my dad indulged us and took us to Beach Haven Fishery, which is known to be one of the better seafood spots around (not quite sure I agree. There, Izzy and I ordered the twin lobster special. This was to be Izzy's whole lobster initiation. At first he just wanted to examine his dinner. He played with the lobster claws, moving them about and then left the cracking to me. 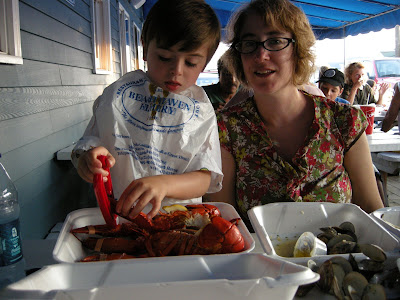 He was not strong enough to crack the lobster and extract the meat. Now my work was doubled. I hadn't considered that cracking two lobsters would not be a barrel of fun. Izzy didn't seem to mind as he stuffed some choice morsels into his mouth. 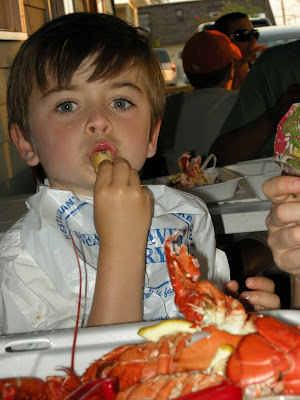 But as the meal wore on, and finding lobster tidbits grew tiresome, Izzy's enthusiasm began to wane. His fingers were messy, his face was dirty and he began to ponder the lobster claws yet again.

I became disgruntled, wondering why I hadn't ordered the leisurely lobster roll. Surely my lackluster attitude rubbed off on Izzy, who, when all was said and done, agreed that lobster was more fun in a salad, a far more relaxing way to savor the sweet, succulent meat.

Lynn, I have a question for you about those blueberry bars.

I made them, and they are delicious, but mine are too crumbly. I can only loosely CALL them bars.

I couldn't find my hand mixer, so I used two knives (not that I've ever really understood that technique). Do you think that's the problem, and my mixer would do the trick?

Or could I/should I add something else if the dough seems crumbly next time?

Eileen: I am not sure that a hand mixer would have been useful for this. I use a Kitchen-Aid for all of my baking and it is truly indispensable. Instead of two knives I would definitely recommend getting a pastry blender. You need to mix the dough enough so that it holds together when pressed. Also, you should refrigerate them after they have cooled.

Guess what? Fridge time did the trick. Thank you! My family loved them.

I've thought about the KitchenAid mixer, but honestly, I'm not that much of a baker, so I'm holding out. Ahhh, I should have registered for it six years ago!

I just found your blog, and it's great. However, I'm afraid my favourite lobster is always in the shell. I think the work to eat it is well-rewarded. Now of course, I am dreaming of fresh lobsters, and living in AZ as I am now makes that a hard dream to translate into reality. I do intend to search, maybe I will end up ordering some online. Twice the price, but when one's REALLY craving something...

Antoinette: Thanks for the encouragement. I will definitely keep on writing. I would like to write twice a day but don't usually have the time.

Fibrolady: I know that most people find eating a whole lobster quite rewarding. I would be happy to have someone crack mine beside me and hand me the pieces.. I just find the process exhausting and it isn't that I am prissy and don't touch my food since I do like to gnaw on lamb chop bones whenever I get the chance.