Flying Eggs Benedict And Other Restaurant Indignities Of The Day 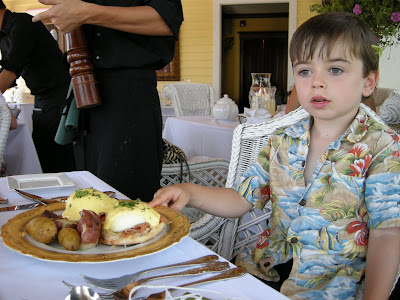 It all began benignly enough. We went to The Gables Inn for brunch today. Everyone ordered Eggs Benedict except for me ( I figured I could snitch some of Izzy's).

My dad, always one to add a special request, asked that his English muffin be "well-done". It arrived looking just as he pleased but when he attempted to cut into it, the Hollandaise sauce went flying, the egg landed on his lap and all manner of expletives ensued. Izzy sat on looking dazed, contemplating his own eggs and I was brought back to my teenage youth when I longed to cringe in the corner or under the table, endlessly embarrassed by all of my dad and former stepmother's special requests and restaurant shenanigans(which is another story in and of itself).

From raging about not wanting the eggs at all to finally accepting the waiters suggestion of getting something else, my dad got himself into quite a snit. The waiter handled it quite nicely, returning with some plain poached eggs on soft toast, side of sausage. I breathed a sigh of relief that it was over, and Izzy went back to finishing his eggs (which, I might add, were not so easy to cut but I managed).

But it wasn't over. Oh no. This was a day of fine dining and dinnertime was a return trip to Sweet Vidalia's. I adored our first experience there but this one was slightly problematic. For one thing, we ordered too much. When we realized it and attempted to remove the last dish from our order (a Chilean Sea Bass that the server recommended), we were told that it was too late.

When the dish arrived (20 minutes after it was too late to remove), it smelled distinctly fishy (according to my dad and stepmother) and I thought it just didn't taste like much. We didn't touch it and sent it back. The waitress, assuming we were trying to get away with having to pay for the dish altogether, returned to say that the chef had tasted it and it was perfectly fine. She said that they would be happy to replace it but we declined as we didn't want to eat anymore.

My dad was livid when we received the bill and were still charged for the dish. Not sure what to think but isn't the customer always right? My dad won't be returning and we didn't stay for dessert. Who loses in the end?

OMG, do we have the same father? There is always something special he wants that is not on the menu. I swear if something he wants is there, he'll wait until the next restaurant when it's not there and order it. Anyway, I'm annoyed for you that they charged you for the sea bass, how wrong. I absolutely hate when they lie about it 'being too late to change the order'.. they are so full of it. Don't go there again!

:)
Stacy
BTW - With twins it is always a pain to go out, like you mentioned, with 1 things are in order, with 2, you don't have a chance. We've been enjoying 'picnics' in the park lately, much more relaxing.

Stacy: Too funny. The sea bass incident was annoying but still and all I really liked the food so it is too bad I need to boycott the place now.

Stacy: How old are your twins? I think you can train them but in the beginning you need to sit between the two of them. You need to have different toys for each when young and then switch. When older, collaborative toys might work.