Don't Know Much About Indian Food... 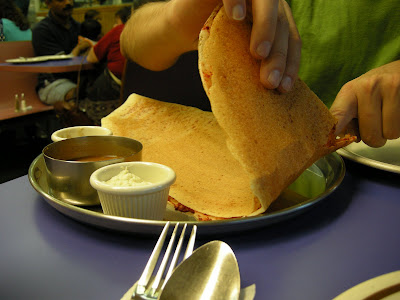 But that wouldn't keep me from trying out a supposed culinary treasure, right here in Jersey City's own Little India, located right near Journal Square. In this thriving area, restaurants, grocery stores and clothing shops abound within a concentrated block or two.

As soon as I read Robert Siestema's review of Udipi Shri Krishna Palace, I was intrigued. It was the perfect excuse to try something new and break free from a Jersey City restaurant rut. Instead of our usual walk to dinner, we needed to take a train.

Was it worth the effort? Well the food was not at all as I would have imagined, given the stellar review. Perhaps I just don't understand the nuances of Indian food. Or perhaps it really wasn't very good.

We had a mysore dosa and some type of fluffy pancake (uppadam?), along with a goat dish and aloo gobi (cauliflower and potato). The flavors were not as pronounced as they might have been and everything was spicier than I had anticipated. Everything was quite oily, as Siestema warned but why is this normal? The waiter appeared to be amazed that Izzy and I were stuck on the Achari Goat, some sort of pickled goat concoction. Indeed we were eating it but we were not swooning, to be sure.

A., who is a big Indian food fan, was sorely disappointed and couldn't imagine why this place had been so well-reviewed. Perhaps an Indian food connoisseur might weigh in. We have previously eaten at Rasoi and Amiya both of which I enjoyed more. Are we missing something? If so we are definitely game for another foray into Little India.
Posted by Izzy's Mama at 8/11/2008 10:01:00 PM

Newark Avenue restaurants are very disappointing. Food is greasy and flavor is lacking.

If you're ever in the mood for the biggest dosa you'll ever see and tender, succulent tandoori meat dishes take the E train to Roosevelt Avenue (Jackson Heights) in Queens and eat at Jackson Diner. It's always full and is cash only.

If you go during lunch, between 11-3:00pm, you can indulge in the buffet (with at least 15 items to choose from) with it's own fresh dosa station all for $9!

I've been going there for 10 years now and have never left feeling hungry.

--Mansi (an avid reader of your blog)

Mansi: So funny. We have eaten at the Jackson Diner and my husband still has a fond memory. The only memory I have is of a burning mouth. It was on fire but I recognize that the food was much better than whatever we ate the other night.

you gotta find a nice indian couple to invite you over for indian food prepared at home. The food is restaurants is terrible.