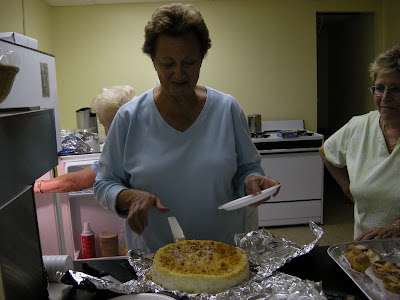 One evening at "La Festa" was not enough. Did I crave a second helping of rice balls? Had I missed out on the sausage and peppers? No. What I had to have was a sampling of Rosalie Nicodino's (sp?) homemade ricotta cheesecake.

Last year we missed out on most of the homemade dessert offerings as they were sold out by the time we looked for them. Then this year, on opening night, the same thing transpired. Perusing the dessert table all I noted were decidedly store-bought goods. But I overheard tell of a special ricotta cheesecake. I had to ask and was told that it had sold out but to try again tomorrow.

Which is why Izzy and I ventured out after the rainstorm. We were practically the only ones to show up at precisely six, only to find that nothing was ready. Big surprise since there had been a substantial downpour. Izzy amused himself by watching the band set-up and we wandered up and down the block, waiting for the deep-fryers to heat up. I didn't want another rice ball but hey, it's only once a year. We only had three this time, since we had already sampled pizza and needed to save room for dessert.

Good thing that all I had in mind was eating since the rain began yet again that evening, with scant signs of letting up. As Izzy and I sat in the dismal church basement, the dessert ladies were squabbling over coffee making, taking their sweet time unwrapping whatever they were selling. I had no choice but to disturb their twittering and ask about the ricotta cheesecake. Apparently it was still in the fridge. 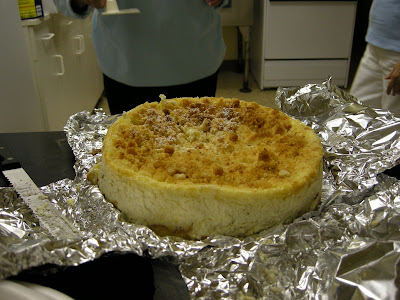 She seemed flattered to hear that I had returned for the cheesecake and slightly bemused that I chose to photograph her. Flattered though she may have been, this woman was NOT parting with any secrets. I asked about the topping and crust and the reply was pound cake. At that point I hadn't even tasted it so it was all speculation. I tried some subtle questioning but to no avail. She plainly stated, "I can't tell you what is in it." Apparently the secret must be closely guarded, for if not, people will make it themselves and not come and buy hers at the festival. Uh..which people would those be, all sitting home conspiring to make their own cheesecakes.Wouldn't be me. I only make mine for special occasions.

We were so full from rice balls and pizza that I had our slices of cheesecake wrapped to go, along with some other options like pizzelle and biscotti which were also homemade. I couldn't wait to sample the goods.

Immediately after dragging ourselves home in the pouring rain, Izzy tucked into his cheesecake slice, which disappeared in minutes. I joined him. Now I am accustomed to heavy New York cheesecake and this was a horse of a different color. It is light, with an eggy, though not unpleasant aftertaste. I like the idea of the pound cake topping but not so sure what I think about the soft crust. One sample is not enough for a final determination. On the biscotti, I shall reserve comment. And the pizzelle, they disappeared without a trace.

Apparently the secret must be closely guarded, for if not, people will make it themselves and not come and buy hers at the festival. Uh..which people would those be, all sitting home conspiring to make their own cheesecakes..............people that like cheesecake

Excuse me, but i thought you were supposed to talk about food. This is a food column isn't it? You talked about the lady more than the food. Plus, you mad many rude remarks.

anonymous: People who like cheesecake might make her cheesecake but how likely is it that they would make it during feast time when they know they can buy hers?

mjwlizards: I didn't realize I needn't to abide by any particular rules when writing my blog. Yes, it is food-centric but food is so much more than just than, isn't it?

I wasn't aware of any rude remarks and certainly didn't mean to offend, only to entice readers to go try the goods. And "the lady" and the food go hand in hand, don't they?