Look Whose Back: More Cat Chronicles 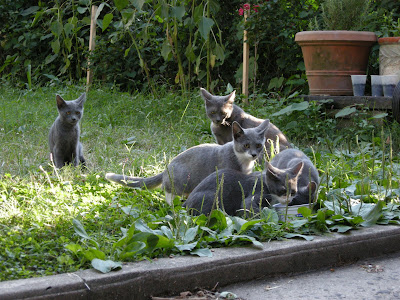 It's been nearly a month and half since we last saw the cat family that had taken up residence in a nearby yard. Then, this past Saturday, they made a miraculous reappearance. First the mama and two kitties showed up in the morning. Later on in the day, the entire family returned. 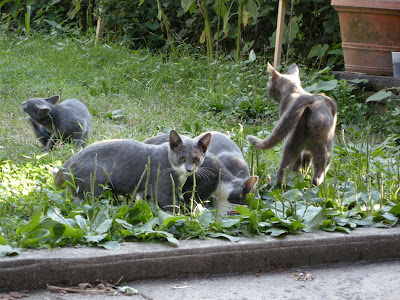 They were even more eager to eat than ever. And they ate and frolicked until we left the house that afternoon. The mama cat is still ever vigilant of her 16 week old kittens. She allows them first dibs on food, licks them and play wrestles with them in the grass.

On Sunday, we fed them in the morning and they lazed about in the shady parts of the yard. They were around nearly the whole day. During the evening hours, A. sat outside in the middle of the yard, allowing them to lick his toes.


Monday morning it was feeding time again and they eagerly came when I called them from their resting spot. Later on in the afternoon, Izzy and I were able to watch them eat right outside our kitchen door. We sat on the floor nibbling empanadas. The kittens watched as warily from only steps away. Two were brazen enough to wander into the kitchen seeking scraps.

None of us could believe that they had all returned. Where had they gone to? I guess we will never know. What to do with them now is the greater question, or so we thought. Last I saw them was Monday night but today, nothing, and that after purchasing a load of cat food at the supermarket.

Just as I was celebrating their return, I am once again mourning their disappearance. If indeed they do return, I promise not to turn into one of these: 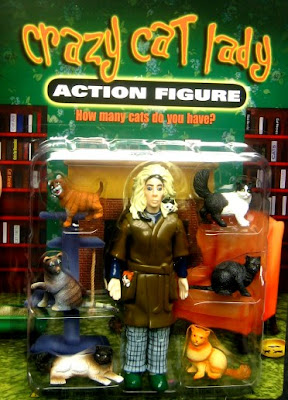