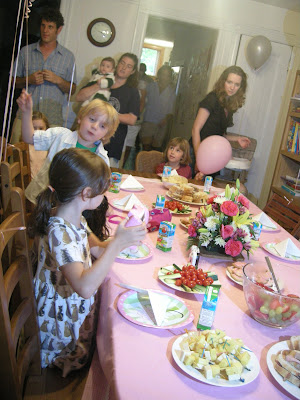 I am a sap for the at-home birthday party. They bring to mind the pictures of my brothers' parties in our rec room in the 70's and and the nostalgic aspect of it all. I too had a couple of parties of the extremely low-key sort when I was four and five but it certainly all went down-hill after that..but that is another story.

Today's birthday guest of honor was Izzy's friend I., who happens to be born of British parents. It was a delight to be a part of her sweet, homemade birthday party, which included a few British touches.

The party was perfect in its simplicity. Kids arrived. They played. A magician entertained them for a short spell and then it was time to eat. The table was set with tea sandwiches (my faves..goat cheese/fig..egg salad..chicken salad and a few others), some veggies, cookie platters. I loved watching the birthday girl keep the others in check.. She admonished her best friend. "No, you may not have a cookie until you have eaten your other food."

I also adored the quirky aspect of some of the British birthday traditions, such as a platter of pineapple and cheese chunks on toothpicks, which were apparently de rigeueur at all British birthday parties of days gone by. The pink-iced number 5 cookies were also a nice touch (Nigella Lawson's recipe so I was told.
After cake and cookies, the guests went upstairs for one last British tradition, Pass the Parcel, in which there is a package with layers of wrapping paper, one for each child. The children sit in a circle while music is played. The parcel is passed and when the music stops the child holding the parcel opens one layer in which there is a trinket.. and so it goes until each layer has been unwrapped every child has something.

Oh my goodness, such memories. I'm from England (although now I live in the US) so those "British touches" resonate with me. Not sure I ever saw a goat cheese and fig sandwich in the UK, marmite and cucumber were our favourite. Pineapple and cheese chunks on toothpicks yes absolutely a party favourite, often served with the toothpicks stuck into half an orange for some classy presentation! Also a ubiquitous party food -- jelly (as in jello) and ice-cream, although I never understood the appeal there myself.

And the games, pass the parcel (one year my mum had hidden the parcel somewhere safe and didn't find it 'til weeks after the party so we had to have an extra mini-party to use it)!! We also used to play pin the tail on the donkey (my neighbour was an artist and drew us a donkey that we used for years), and sardines (which I think must have been invented as a rest for the hosting parents since it involved lying flat on the floor, side by side, as still as you could; the last person to move wins, I was very good at that game!).

Iris: The Goat cheese-fig combination was stolen from me! I guess she felt it fit in with the others!

As for Pin the tail on the donkey, that is an american tradition too! Maybe I will do that at Izzy's party next year.