Long before Izzy was born, his Papa and I walked across the Brooklyn Bridge. Maybe even more than once. We had the pizza of my dreams at Grimaldi's , followed by homemade ice cream at the then newly opened Brooklyn Ice Cream Factory. Pizza perfection and old-fashioned ice cream, what could be better for a city summer night?

I have tried, on numerous occasions, to recreate those evenings but circumstances of one kind or another have kept me from doing so. Between broken limbs, babies and unwilling friends, I have been unable to make my way back to what has become the pizza/ice cream mecca of my mind.. until today. Hard to believe but A. agreed to a family outing in the late afternoon. I would finally get to take Izzy on my ideal outing. As I should already know by now, things don't always go according to plan.

First we got a late start. Instead of leaving at 4:30, we left at 5:30. Getting to the Bridge from Jersey City didn't take much time at all but the Brooklyn Bridge was crowded with tourists. Whose idea was it to do this on a holiday weekend? I thought the city was supposed to empty out..apparently it did for some others..but not for us. Izzy braved the crowds and he managed to walk the entire way across the bridge by himself. He was giddy with delight and certainly worked up an appetite.

We finally arrived at Grimaldi's only to be met with an enormous line and it was after 7:00 p.m. There was no way we could wait an hour since Izzy was already in the whining phase, and rightfully so. We decided to try our usual alternative, Noodle Pudding..no dice either with a 45 minute wait. The only choice was to troll the block for the first decent-looking place to eat with no wait.

That turned out to be a restaurant called Oven. From all outwards signs, it seemed to be a fine spot. Menu looked reasonably interesting and they had pizza. Diners appeared to be happily engrossed in their meals and it was next door to an ice cream parlour called the Blue Pig. It all seemed like it was meant to be. What could possibly go wrong? Well, as it turns out, nearly everything.

The staff at Oven was extremely friendly and accommodating, perhaps to compensate for the extremely unappetizing fare coming from the kitchen. I know that it is unfair to disparage a restaurant after one dining experience but how could every single item be awful? Let me count the ways.

First we ordered a salumeria platter of meats and cheeses. This jumble of items arrived: 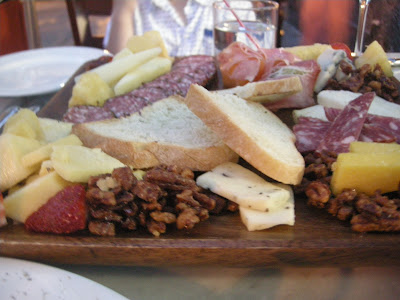 Even Izzy commented that prosciutto didn't taste quite right and the pre-cut chunks of cheese were rubbery. Soggy candied walnuts were placed in small piles in corners. Not only that, but there were sodden pieces of fruit arranged throughout, including pineapple, which didn't seem like a good match for platter. This certainly did not bode well for the rest of our meal. The beet and goat cheese salad may have been a step up, crisp diced beets and other crunchy vegetables in a bland vinaigrette, but that wasn't saying much.

When my Kobe Beef Lasagna showed up, looking like it had been deconstructed, I had a feeling it was all over. Apparently they had 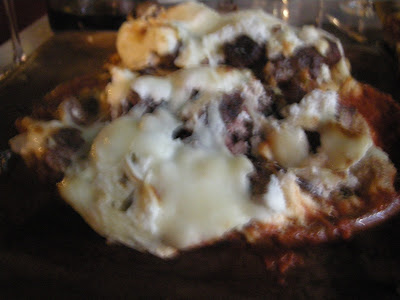 forgotten to use the oven before serving it, as it was barely lukewarm. The Kobe beef was unseasoned and it just looked like they placed mounds of ricotta and mozzarella on top for effect but not flavor. I barely ate two bites before putting my fork down and A. and Izzy wouldn't even try it.

And the Margherita Pizza? Don't even get A. started on that one..He did not even manage to eat half of the pizza and although he is not one to waste food, the leftovers did not even merit a doggy bag. Izzy barely nibbled on his pizza either. The meal was dreadful but I still held on to the promise of the dessert...at The Blue Pig.

Izzy and I wandered next door while A. nursed the only acceptable part of his meal, the wine. I was lured into the Blue Pig by its sign for "homemade ice cream." Only a few flavors were left and not even one appealed to me.. I had little interest in Coconut Butterfinger. The only thing of interest to Izzy was what they called, "Red Ice"..I shudder at the thought but since it was so far past Izzy's bedtime, there was no room for negotiation. I let him have it. Ordinary cough-syrup cherry tasting ice..bleah. On the bright side, eating it provided entertainment for the extra long trip home, a result of subway rerouting.

Poor Izzy, he fell asleep on his Papa's shoulders on the Path and we carried him from a taxi inside the house. It was after 10 p.m...upon entering the door he awakened briefly to take off his shoes and managed to get upstairs, wash up and brush the red sugar coating from his teeth. He crawled right into bed and barely made a peep..He is my champion food-adventurerer!

A. seemed to think that this ill-fated excursion would finally rid me of my wish for pizza/ice cream nirvana. He is so wrong. I am now even more determined to get it right. Anyone game for a daytime outing??