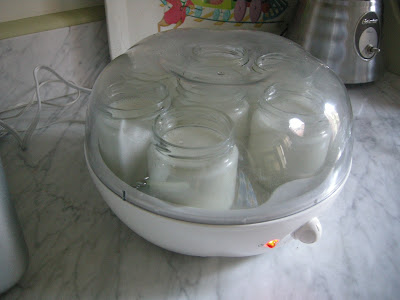 The day before Yom Kippur, Izzy and decided we were going to try out our brand-spanking new yogurt machine. Maybe not the smartest move before a fast but we had been contemplating doing it for a few days and I was running out of store-bought yogurt. We went ahead, despite my reservations.

The process is so simple I can't believe that a yogurt machine doesn't reside on every yogurt lover's counter. I simply boiled some milk, allowed it to cool, added a small amount of yogurt to it, stirred and poured the liquid into the yogurt cups. We turned on the machine and let it do its thing. The machine did not begin its work until four p.m. so the yogurt wouldn't be ready until about midnight. I wondered how I would possibly resist trying it in the morning and realized I had chosen the absolutely wrong time to try this recipe.

Throughout the evening, I kept peeking at the yogurt, even opening up the top (even though the instructions warned against this). I was shocked to see that it had indeed solidified and I turned the machine off just before midnight and covered up the jars and stuck them in the fridge.

Izzy and I were alone this morning and although I had to fast, Izzy is, of course, exempt. As I prepared his breakfast, the small glass jars of yogurt were taunting me in the fridge. I quickly shut it and went about preparing Izzy's breakfast. After he had eaten, we went about our morning business but before long, it was "snack time". And guess what Izzy wanted..the yogurt!

So I opened a jar, sniffed it, and handed it over to him. He was quick to spoon it up and I watched with curiosity. He said that it was sour but ate it anyway. He wanted to know why I couldn't try it so I explained to him a little about the fast. It was obviously a notion difficult to grasp, for a child accustomed to eating at his whim.

As the day wore on, and my hunger increased, I began to rationalize that the point of fasting was lost on me today. One fasts to avoid the distractions of food, yet food was most distracting to me. The vision of fresh yogurt was calling me..Most of our day was spent inside since Izzy was slightly feverish and by three o'clock I could take it no longer. Fasting failure that I was, I hid my act from Izzy and surreptitiously removed the yogurt jar from the fridge.

So sorry to report that I broke my fast for a somewhat sour experience. The yogurt seemed far too tart for my taste. It wasn't bad, just not the yogurt of my dreams. I finished the jar and placed it in the sink, seemingly unnoticed. But that Izzy doesn't miss a trick. He saw the jar in the sink and right away remarked, " I see another yogurt jar. Who ate that?" I had to confess and he added, "But you are not supposed to eat today."

I didn't feel as guilty as I thought I would and I finally figured out why. Usually I prepare a Break-Fast for either family or friends. Feasting after the fast is a holiday ritual that is best when shared. This year we had no company and I hadn't planned on any special meal. Izzy and I ended up having a rather odd "Break-Fast" meal, which was on the Chinesish side, including a large pan of sauteed Bok Choy. It was yummy but not exactly the bagels and lox I had in mind.
p.s. This morning I had another yogurt. Turns out that it is not that tart at all. Maybe my tastebuds were altered after fasting. I still need to tweak the recipe so I will wait until the next attempt before posting the recipe.
Posted by Izzy's Mama at 9/22/2007 08:17:00 PM

I'd say drizzle it with a little bit of honey. I bet that would be delicious!
your yogurt maker is so much prettier than mine!