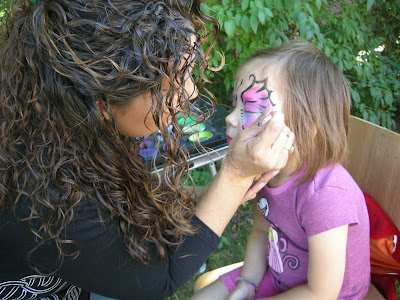 Today was T.'s birthday party. She is a friend of Izzy's who left Jersey City for the greener pastures of Bloomfield (I daresay one could raise a cow out in their wide stretch of backyard). Izzy had been anticipating the event for days and our ride out with T., a neighbor friend in a Zipcar pick-up, only added to the thrills.

The scene was set for an afternoon of simple preschool pleasures. Giant bubble wands with vats of bubble juice were arrayed strategically around the yard. An adorable play gym stood awaiting young swingers and there were coolers of organic juices for the kids. Snack foods and fruit salads were awaiting sticky fingers and the big treat of the day was the face painter.

The birthday girl was first in line to have her face painted and she maintained an ultra-serious demeanor as she was turned into a lovely butterfly. When I asked the painter her suggestions for boys I was repelled by her suggestions (Spiderman, skull, snake, etc). I had hoped Izzy would choose to be a less gender-specific creature but alas, he had his own ideas. As soon as he eyed his friend T, sporting a t-shirt with Spiderman, I knew I had lost my case. The painter (quite aware of my mindset) tried to suggest other possibilities but Izzy wouldn't hear of anything but Spiderman. I had to relent lest I turn him into a Spiderman maniac. Funny thing was, after Izzy morphed into Spiderman, many of the other kids, boys and girls alike, were painted as Spiderpeople.

Mid-face painting, it was cupcake time. Trays of tiny pink frosted cupcakes magically appeared in the yard. K. (T.'s mom), like me, is a Billy's Cupcake, aficionado and with each passing birthday the recipe seems to improve. The cake was light and moist, the frosting perfectly fluffy. Who needs a bakery anyway?

Cupcakes, more play, another simple at home birthday success. The highlight of my afternoon, aside from eating one of those scrumptious cupcakes, was observing my little spider boy, of red and black face, tuck into those delightfully pink treats. The moment was captured and J. (T.'s dad) turned the photo into an instant homemade party favor, stuck into a popsicle stick frame. 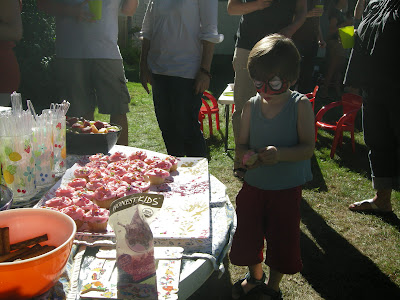