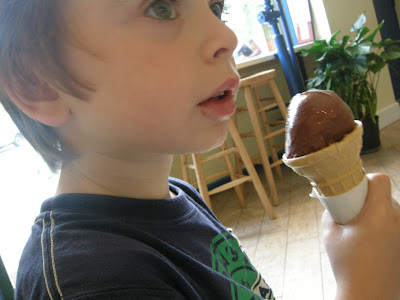 At least it does in New York City where temperatures are still quite steamy. You won't hear me complaining because it means there is still time for more gelato. On our way to pottery class this afternoon, Izzy and I made a new gelato discovery, L'Arte del Gelato, new to the Greenwich Village but apparently not to New York City.

I had noticed their shop at the Chelsea Market a few weeks ago, but because of was stuffed from my Ronnybrook Farms experience I wasn't up for even giving them a try. Then last week, as we were licking our cones from Cones on Bleecker, we discovered another outpost of L'Arte del Gelato, right around the corner on 7th Avenue. It is a small take-out shop with a bench inside and another one out front.

Several flavors in the display case were adorned with fruit. The pineapple had a large pineapple sticking out and the coconut had a hunk of real coconut. Izzy chose the ultra-dark looking chocolate. It was intense and not too sweet. I had a cup of frutti del bosco and nutella. The frutti del bosco was bursting with berry flavor though it was a smidge too icy. The nutella appropriately creamy but less intense than real Nutella. 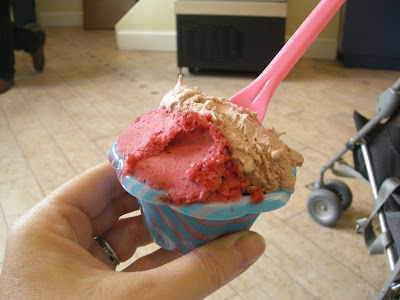 We were both delighted with our find but will now be faced with an everlasting quandary..L'Arte del Gelato or Cones? That is the question.
Posted by Izzy's Mama at 9/27/2007 07:40:00 PM