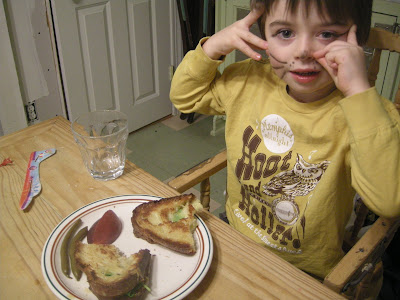 Whatever you call it, Izzy only ate two bites, along with a few pickled green beans and some apple slices, before proclaiming he was full. Why was he full at dinnertime? Because we had just returned from a classmate's birthday party, full of romping and cats as evidenced above. Izzy was truly "weared" out.

I have noticed a pattern with the Sunday late afternoon birthday party. During these parties, the children are fed a variety of foods, which usually include pizza, juice boxes and cake. These items are served between 4-6 p.m. which is more like snack time than dinnertime. Izzy becomes completely riled up and exhausted from the affairs and then I think he will just go home and go to sleep. But no, he always asks for some dinner. I knew tonight that I wouldn't have much to offer.

In the car on the way back, I asked if he would eat some grilled cheese for dinner and he said no. But H., who was driving us said something like, "I am sure cheese and toast will do." Cheese and toast would never do, or so I thought until H. explained that that is what the British call grilled cheese. I didn't think Izzy would want that either but once home he agreed to it, perhaps because he knew he wouldn't actually eat it.

So interesting . . . balancing the "external influences." Hmmmm. On a random note, isn't it great that kids seem to love pickles? Noe scarfed one yesterday, making that precious "pickle face" with each bite, but then going back for more.

Ah... the afternoon birthday party. So true! My 3 year-old won't eat a thing after one of those. Not even cheese on toast. I mean, who needs that after a BIG piece of cake.